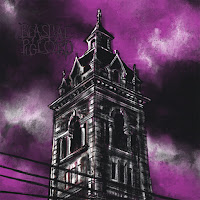 Band: Beastial Piglord
Location: Kinston, North Carolina
Country: USA
Genre: Extreme metal
Full Length: Disourminth
Label: Slorebs Castle Records
Format: Digital (streaming on Bandcamp and Youtube)
Release date: March 1, 2020
This is one of those bands that brings the hidden handle. It also looks like one of those makeshift paintings made with the drip technique. The result has a monstrous, uncomfortable beauty. When hanging, it is also difficult to know where in the house it would look good. That's the first thing I figure out as an introduction to the chaotic and shrill sound of BEASTIAL PIGLORD… what a good name for a band! Although this is not properly a band. It is more the insane soliloquy of a man condemned to death. This evictee is called Hudson Conner since 2012 has been casting dark aural curses on the lands of Kinston, North Carolina. Conner does all the music and production and some rate the BEASTIAL PIGLORD sound as experimental Death Metal; qualifying that is very far from describing his music, even, I am doubting whether to put it in the metal category. This music is closer to being a score for a Gods of War-style video game or the score for a supernatural horror movie, rather than a metal project. On the other hand, "Disourminth" brings 11 cuts and is the seventh in the personal account of this atmospheric project, but it is paradoxically the second album released in this abominable 2020, more exactly last March 1st. There is another third album that follows this one, entitled “Cosmicism and Neuselore”. Hudson maintains its noise factory with the boilers always smoking, since between 2018 and 2020 he has made 8 full-length albums and one EP, available for free on digital format on his Bandcamp, you can also donwload the full album on mp3 or flac for 7 bucks. The possible grace or virtue of this style of music is especially supported by creativity at the time of mixing, as well as in experimentation with low frequencies or with several effects and noises. Otherwise, without the soundboard mixing effects, a computer, and a Bandcamp account, this style of indie music would be lost. It is hard to know what kind of instrumentation emerges from this clotted blood phlegm, there is percussion, distorted acoustic guitars, and a barely audible voice that looks like Charon clearing his throat as he paddles his boat across the Stygian river. There are some fuzzy Death Metal bases on songs like "8th Entd" or "Clustacher Elth", but again, the experimental and psychotic mix of this album makes it difficult to catch up with this sound effect throughout an entire album. This is an album not for everyone, I do not know if there is a close description to cover the vibrations, noises, and reverberations that escape from the jagged jaws of BEASTIAL PIGLORD. I do not lie when I imagine the sound made by a squad of rats trapped in a metal box, abandoned on the dumps of a field hospital, in times of bacteriological war? Who would have guessed, this band is, after all, a perfect soundtrack for the present times. –Jorge A. Trejos