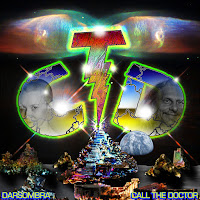 Band: Darsombra
Location: Baltimore, Maryland
Country; USA
Genre: Trans-apocalyptic galaxy rock
EP: Call The Doctor / Nightgarden
Format: Digital album
Label: Independent
Release date: April 2, 2021
What’s going on all, I’m back again with another album review!
This time around I’ve discovered one of the most unusual bands yet, and that band is none other than Darsombra and their exclusive EP (that will later be a double album), ”Call The Doctor/Nightgarden”.
So, as with all new music the album cover and track titles can only do so much in helping guess what the album is going to sound or feel like, I’ve heard brutal albums with plain or peaceful album covers, then mellow albums carrying the most disturbing of images it’s all relative and today neither the album cover nor tracklist could have prepared me for what I heard.
For started the first track ‘Call The Doctor’ which is over 14 minutes long has this strange fusion of electronic and Progressive Metal. The best way I could describe it is what would have happened if you combined Daft Punk with someone like Porcupine Tree.
It’s gone the one and only spoken lyrics which is ‘Call The Doctor’ said in this real 80’s Synth Pop style with it almost auto-tuned and lingering in the background.
There are a lot of interesting elements such as the constant guitar riff combined with the future introduction to the electronic elements spoken about earlier, you’ve also got some strange vocal harmonies making the ‘ooooo’ and ‘eeee’ sounds in between certain parts of the song.
The next track ‘Nightgarden’ I feel and the stronger emphasis on the electro/synth sounds as it started off with this prominent Synth chord that follows the track as the guitar follows with stronger and longer riffs and solos.
What’s interesting about this track besides the occasional use of sparkle sounds is at the end there’s this 1 minute lingering of owls in the night, when I was listening to this album I was walking my dog at night so it wasn’t the best time to hear this sound and maybe it wasn’t done on purpose probably just forgot to trim the end of that looping sound effect, or maybe it was I’m not sure either way I can safely say it’s got a strong ‘ambient’ quality to the song, has a more consistent vibe than the first track and it makes you feel like your in a psychedelic experience (someone has to give this a try and see).
Overall, a very creative two tracks, and as said above it’s apparently meant to be a part of a bigger double album and if each track on this album is as long as these two then that will make for quite the lengthy but surely immersive experience!
https://darsombra.bandcamp.com/album/call-the-doctor-nightgarden-ep
Link above if you want to go support them! They definitely deserve it! –Corban Skipwith
Lineup:
Brian Daniloski
Ann Everton
Track list:
1. Call The Doctor (Sun Side)
2. Nightgarden (Moon Side)
Relentless Reviews With Corbz
Posted by Dave Wolff at 9:46 AM