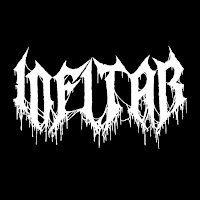 Band: Infitar
Location: West Java
Country: Indonesia
Genre: Death metal
Single: Regurgitated Hate
From their upcoming album "Inhuman" to be released on Suddendeath Records (cassette) and Lingering Records (CD) April 28, 2021
Format: Digital, streaming
Label: Independent
Release date: January 23, 2021
I interviewed this Indonesian death metal band in 2015, after reading Frank Garcia’s interview with them at Arte Mortifica Reviews. Back then they had just released a couple of demos which they were circulating through the tape trading network in their country and abroad. They've since released some more demos and their 2017 debut full-length “Rotation of the Sun”. “Regurgitated Hate”, released last January is their latest outing, which I got wind of when Latif sent me its Bandcamp and Youtube links. There is more information offered on Youtube but both links showcase flawless sound and technical improvement on the band's part. “Regurgitated Hate” is a preview of their next full-length "Inhuman"; if this single is any indication of how Infitar is maturing I'm looking forward to this month's release. This single is surprisingly well produced with classic thrash metal and early death metal vibes prevalent. The instruments and vocals pay excessive homage to the late great Chuck Schuldiner, and the gleaming production doesn’t undermine its savagery. I'm easily reminded of seeing Death for the first time and feeling something new was brewing in the world of underground metal. The production of the drum tracks reminded me of Kreator’s “Endless Pain” and Sodom’s “In the Sign of Evil”; that slightly bassy, compressed sound that helped drive the material. There seems to be echo added to the vocal tracks which give “Regurgitated Hate” additional substance and depth. The classic thrash energy supplements the innovative riffing inspired by Death, Obituary and Autopsy and will revitalize your affinity for those bands and early DM in general, earlyDM from a time when the genre was beginning to show the bands were capable of writing accomplished songs while making them raw and unforgiving. –Dave Wolff
Lineup:
Latif: Vocals
Leonard: Guitars
Gembes: Bass
Bob Gulma: Drums
Posted by Dave Wolff at 8:17 PM