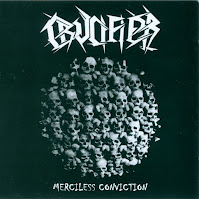 Band: The Crucifier
Location: Athens
Country: Greece
Genre: Thrash metal
Full Length: Merciless Conviction
Format: CD, streaming
Label: Hell Productions
Release date: 2009 (released independently in 2002)
Welcome back, everyone!
You know, I thought to myself why not turn back the clock a bit? The only thing going is “time” itself so I decided to rewind time back to 2009 with this brutal release from the Greek band The Crucifier and their album “Merciless Conviction”.
The first thing I can say about this just over an hour-long album is that it’s packed with enough firepower to take on the whole army (and then some!) with its destructive combination of Thrash, Death, and hints of Black and even Garage Metal all thrown into one pot to create this true monster of an album!
Just like the Greek Gods themselves, they unleash all the wrath of Olympus. They bring the thunder of Zeus with their ferocious vocals, screaming, howling, and downright acting ballistic on the microphone to prove just how riotous they can be!
With the force of the waves of Poseidon, they crash down their relentless drums with the speed of Hermes unleashing the Thrash origin as hard as fucking possible!
To almost go against the motherly Goddess Hera they strip the album of any kind intent, any peaceful thoughts or actions. They are purposely morbid and just like the god Dionysus they have the power to be animalistic and drive all mortals insane!
It’s almost as if the god Athena herself granted them the ability to create new objects of horror and madness through their music, screeching and pondering all kindness out of all men and woman, with the foresight of Apollo ripped the souls out of even the toughest of metalheads and left them shaking and red all over!
Without the guidance and care of the goddess Artemis to cure the world of the destructive plague brought upon the ears of mere mortals. It’s safe to say metal will never be as ravaged again! If you think you’re up to it, please check out this album. I will link it below! -Corban Skipwith
Lineup:
Hlias "Thanatoid" Kyriazis: Vocals
George Balotis: Guitar
Angel Nakasis: Rhythm guitar
Kostas Pavlidis: Bass
John Balaskas: Drums
Tracklist:
1. Lost Mind
2. Execute Them All
3. Innocent World
4. Merciless Conviction
5. Suffering Hours
6. Pure Hate
7. Violent Vortex
8. Yappie Dream
9. Crucifier
10. Lost Mind (bonus track from “Innocent World” demo 2001)
11. Innocent Word (bonus track from “Innocent World” demo 2001)
12. Suffering Hours (bonus track from “Innocent World” demo 2001)
13. Violent Vortex (bonus track from “Innocent World” demo 2001)
14. Crucifier ((bonus track from “Innocent World” demo 2001)
This review can also be read at Skipwith's Facebook group Relentless Reviews with Corbz. -DW
Posted by Dave Wolff at 7:01 PM