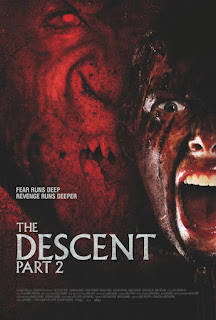 The Descent: Part 2
Directed by Jon Harris
Written by James McCarthy, J Blakeson and James Watkins (screenplay), Neil Marshall (characters) (uncredited)
Starring Michael J. Reynolds, Shauna Macdonald (as Shauna MacDonald), Jessika Williams, Douglas Hodge and Josh Dallas (as Joshua Dallas)
Celador Films, Canal+ (with the participation of), CinéCinéma (with the participation of), Pathé, 2009
I watched the film “The Descent” years ago, but I never knew there was a sequel. As I was browsing Tubi I came upon “The Descent: Part 2” and thought I would give it a go. As it turns out, this movie was just as enjoyable as the first…and fans of gory-style horror are sure to sink their teeth deep into this one!
Released in 2009 and directed by Jon Harris (with the producer of the first film acting as executive producer) The Descent Part 2 manages to churn up enough gore and splatter to appease most gore-hounds; yet it still maintains a somewhat mainstream vibe due to the overall production quality.
The creatures, known as crawlers (I had to look that up on Wikipedia) are just as grotesque and menacing as in the first film, and I dare say I wouldn’t want to meet one in the dark depths. (I’m not much of a spelunker, so I don’t think I need to worry).
This movie was released in cinemas in 2009 in the UK, but it only managed to snag a direct to DVD release in the United States. Which is a shame really, because The Descent Part 2 is top tier and is of a higher grade than a lot of films that make it to the theatre…but on a positive note the U.S. DVD release pulled in seven million!
It might take a while, but I can go out on a limb and say that I would for sure watch this again. And I would suggest it to anyone interested in this sort of thing. I mean…what do you have to lose? –Devin Joseph Meaney
Posted by Dave Wolff at 6:06 PM