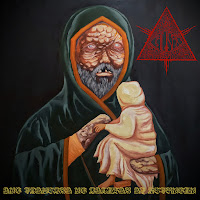 Band: Dalisay
Country: Philippines
Genre: Death/thrash metal
Full Length: Ang Trahedya ng Dalisay at Ketungin
Format: Digital album
Label: Independent
Release date: September 15, 2021
Who would’ve known that the most brutal sound in metal would come out of the Philippines?
Today I’ll be reviewing the September 2021 release of the band Dalisay, Ang Trahedya ng Dalisay at Ketungin
This album first of all takes the expression ‘sounds like an exorcist’ to a whole different level!
This is one of the most brutal metal albums I’ve ever heard and I mean that if this album came out during the prime era of Cannibal Corpse they would be in deep trouble! Make the mistake of making light of this album!
From front to finish this is such a brutal experience! I mean they are going crazy on the instrumentation the guitar is insanely heavy the drums are relentless and brutal the bass is just shredding your bones apart that’s how bloody ruthless it is!
The thing that I do find interesting though is that in the longer cuts there are two of them, ones nine minutes and ones closer to twelve they do add some variety.
So some elements of acoustic to start the track off some sampling of like cars on the street or something.
It’s in the two tracks that I see the experimental part of them because the rest of the album from the tracks are nothing but pure death metal brutality I would say something heavier than death metal! Maybe a combination of both black and death but in terms of the severity of it all.
Literally the whole time I was listening to this album I was getting scared! It’s just insane the vocals I don’t know anything you’re saying because obviously I’m not from the Philippines but man they can’t be seen anything nice! This is just pure violence on a stick!
See this is the kind of album for an old-school traditionalist nothing but loud hammering instrumentation over death growling, high-pitched scream combination performances, This isn’t for the casual metalhead on the fence this is for decade-old followers.
I will give the album this much it has blown away my expectations of what true heavy (heavy) metal sounds like!
It will sound like a current band because even though they’re taking the old past roots it doesn’t make what they’re making any less unique any less brutal or any les sadistic by any means of the imagination!
Please go listen to this album go give them the support they deserve!
To all your metal bands out there you better watch out! You better shift your game up because at this rate you’ll be blown into the water by this band right here great job guys. –Corban Skipwith
Lineup:
Jorel Torres: Guitars, vocals
Mark Gilbert Saguibo: Bass
Jux Mauricio: Drums
Track list:
1. Botod
2. Karnal
3. Sa Bunganga ng Pagkabaliw
4. Ang Libing na Naipundar ni Jetro R Soler
5. Hamog
6. Gulok
7. Ang Trahedya ng Dalisay at Ketungin
This review can also be read at Corban Skipwith's Facebook group Relentless Reviews with Corbz. -DW
Posted by Dave Wolff at 8:50 AM