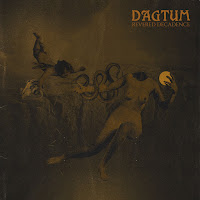 Band: Dagtum
Country: Philippines
Genre: Experimental death metal
Full Length: Revered Decadence
Format: Digital, CD, jewel case CD
Label: Eastbreath Records (Indonesia)
Release date: August 30, 2021
Bandcamp. A platform that has provided me with so many great albums, with all the reviews I’ve done I should get a sponsor! Bandcamp if you can see this, hook me up! Haha.
Anyway, today we will be covering a Philippine band! How sick is that! And their take on a Death Metal album with ‘Revered Decadence’ by Dagtum.
So this is the August 2021 release of the band with eight new tracks at their disposal.
Going into this thing blind with no prior information on the band, I was curious to see what they brought to the table and in what way they would utilize the Death Metal sound.
Well, firstly let me just congratulate them for seemingly injecting the art of ‘Ambience’ into their songs, with almost every track you can hear these smooth and almost theatrical vibes coursing through the songs to help elevate the essence of the Death Metal sound.
I wouldn’t go as far as to say it was steering towards the ‘Symphonic’ Death Metal but the elegance brought with those technical and magical instrumental passages is a real highlight for me.
When the band decides it’s time for business then they mean it! I would attribute their rendition of the sound to the classic ‘Meat and Potato’s’ style with the trademark heavy instrumentation, those earth shaking guitar riffs and patterns, the drums thrashing faster than you can headbang! And the vocal performances are in a unique league all on its own!
The vocals have this interesting power behind them that I don’t see too many of its contemporaries possessing, it almost sounds like a mix between Black Metal and Death Metal with the way that it’s delivered and the deep, menacing growls and screeches.
You can hear the intensity in the voice and with combinations like that you can’t really lose!
I also really want to point out the closer track ‘Monolith Of Grace’ because the way they choose to end the album (which I always feel is a key mistake most bands don’t think about) was done perfectly! Instead of having a crazy, manic powerhouse of a song to end they brought back the essence and aura of the ambient sounds and ended things with an instrumental track that had all the shine of a shining star! It was marvelous to say the least and made me feel that much more excited to review this album once it was over!
In closing, this is one badass album that’s coated in magic aura. The creativity and the technicalities are on display when needed even in the presence of a traditional Death Metal approach which when done right can be the most satisfying sound in the world and they did just that!
So help me by helping yourselves to a taste of some real bone crushing music and feel the magic! –Corban Skipwith
Lineup:
Adam Carlo Along: Bass, vocals
Ronnel Vivo: Guitars
Ronaldo Vivo Jr.: Drums
Track list:
1. Immaculate Decay
2. Avarice Enshrined
3. Ad Infinitum
4. Werewhale
5. Seething Seasons in Catharsis
6. Ocean's Edge
7. Ill-Lit
8. Monolith of Grace
This review can also be read at Corban Skipwith's Facebook group Relentless Reviews With Corbz. -DW
Posted by Dave Wolff at 1:30 AM