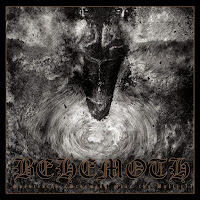 Band: Behemoth
Country: Poland
Genre: Black metal, black/death metal
Full Length: Sventevith (Storming Near the Baltic) (reissue)
Format: Vinyl, CD, streaming
Label: Metal Blade Records
Release date: September 3, 2021
By now Behemoth needs little introduction as Poland’s premier black/death metal band, considering how far they’ve come since their inception. Today they’re known as gifted musicians and have had their share of controversy, but in 1995 they were another corpse painted face in an ocean of bands participating in the second wave of black metal, a young but growing movement made infamous by press coverage of the Norwegian scene. A decidedly average band with primitive songwriting whose potential to grow beyond their melancholy and amateur production had yet to be revealed.
Originally released on Pagan Records (Poland), their 1995 debut “Sventevith (Storming Near the Baltic)” retained the distorted dissonance of their demos “Endless Damnation” (1992), “The Return of the Northern Moon” (1993), “Thy Winter Kingdom” (1993) and “...From the Pagan Vastlands” (1994), but showed indications of growth and sophistication. Recorded when founding member Nergal was sixteen, “Sventevith” was one of the first albums to add folk themes to their cold atmosphere and lyrics comparable to storytelling. This formula was almost mystical and transcended the crudity of their early years.
Metal Blade reopens the crypt where “Sventevith” is buried, reintroducing it to fans who missed it the first time. Why do so if the band has progressed so far? At Encyclopedia Metallum I read several reviews of the original Pagan Records release, and the consensus seems to be it’s a milestone in its own right despite its lesser popularity. Some even say it’s preferable to Behemoth’s recent material, despite its less advanced musicianship and poorer production. No effort was made to remaster the album before Metal Blade’s reissue, so for better or worse you’ll hear this piece of the band’s history in its original form, cold darkness and all.
“Chant of the Eastern Lands” thrusts you into the album without preliminaries, without an intro, and no time is wasted showcasing the acoustic guitars and keyboards underscoring the biting guitars, relentless percussion and caustic vocals. The bass could have been more prominent, but it’s there like something rotting underground, an adequate addition to the atmosphere provided by the keyboards. That there are more acoustic guitars is a fine counterpoint to the iciness and annihilation Behemoth honed since their demo days. The contrast between these themes continues throughout the album, and is further improved upon with “Grom” (1996).
Metal Blade’s reissue contains unreleased tracks and rare live appearances by the band, including the 1996 Black Metal Inferno Fest and the 1996 Pagan Triumph Tour, both at the Netherlands. Visit MB’s announcement for more information. –Dave Wolff
Lineup:
Nergal: Vocals, guitars, bass, songwriting
Baal Ravenlock: Drums
Track list:
Sventevith (Storming Near The Baltic)
1. Chant of the Eastern Lands
2. Touch of Nya
3. From the Pagan Vastlands
4. Hidden in a Fog
5. Ancient
6. Entering the Faustian Soul
7. Forgotten Cult of Aldaron
8. Wolves Guard My Coffin
9. Hell Dwells in Ice
Sventevith (Storming Near The Baltic) - Artefacts
1. Cursed Angel of Doom
2. Dark Triumph
3. Bless Thee for Granting Me Pain
4. Hell Dwells in Ice [Unreleased]
5. Hidden in a Fog [Live at Merry Christless Festival, Poland, 2017]
6. From the Pagan Vastlands [Live at Black Metal Inferno Fest, Netherlands, 1996]
7. Hidden in a Fog [Live at Black Metal Inferno Fest, Netherlands, 1996]
8. Wolves Guard My Coffin [Live at Black Metal Inferno Fest, Netherlands, 1996]
9. Hidden in a Fog [Live at Riviera Remont Club, Poland, 1996]
10. From the Pagan Vastlands [Live at Pagan Triumph Tour, Netherlands, 1996]
11. Hidden in a Fog [Live at Pagan Triumph Tour, Netherlands, 1996]
Posted by Dave Wolff at 1:41 AM