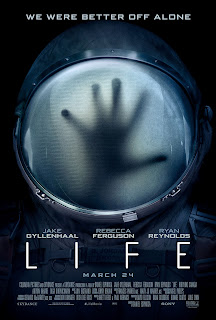 Life
Directed by Daniel Espinosa
Written by Rhett Reese and Paul Wernick
Starring Hiroyuki Sanada, Ryan Reynolds, Rebecca Ferguson and Jake Gyllenhaal
Columbia Pictures, Skydance Media
March 18, 2017 (USA)
While browsing Netflix I stumbled upon 2017’s “Life”. Starring Jake Gyllenhaal, Ryan Reynolds, and Rebecca Ferguson, this film follows a six member crew of the International Space Station…and the crew finds the first evidence of life on Mars!
Apparently the film received mixed reviews, but personally I found this movie to be not only highly entertaining, but both visually appealing and seriously climactic…and the creature “Calvin” creeped me out in more scenes than one.
I will also note that this is higher budget than the majority of the films I have been reviewing recently, and the CGI was entirely on par. The acting and script were also spot on, and the ending will leave you with goosebumps. (Or at the very least a case of the jitters).
Directed by Daniel Espinosa and written by Paul Wernick and Rhett Reese, the movie grossed 100 million worldwide, the production budget totaling around 58 million. Which from the perspective of a broke man is some serious coin!
All in all I thoroughly enjoyed watching this, and I would suggest it to anyone who has an interest in scifi-horror. If you are anything like myself, I say that you will not be let down. This was great! –Devin Joseph Meaney
Posted by Dave Wolff at 5:54 PM