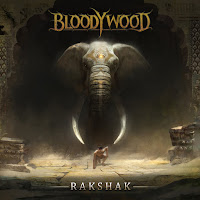 Band: Bloodywood
Location: New Delhi
Country: India
Genre: Indian folk/rap/metal
Full Length: Rakshak
Format: Digital album, digisleeve CD
Label: Bloodywood Media Private Limited
Release date: February 18, 2022
Listening to this album reminds me again of Sam Dunn highlighting the countries where bands incorporate traditional music with near deafening guitars on his “Global Metal” documentary. I still can't describe Bloodywood's debut in such a straightforward manner since they add so much more to their formula. There are overt influences such as Five Finger Death Punch and Linkin Park on "Rakshak", but other influences are added with such understatement that the end result is majestic and monumental.
Bloodywood may come as a surprise to you if you are talking about diversity, or the lack thereof, in extreme/underground metal, based on what they've done with their music since they formed in 2016. Initially, they covered Bollywood songs in the nu metal style of the bands Rage Against The Machine, Slipknot and System Of A Down. By covering "Heavy" by Linkin Park, the band caught the attention of publications such as Metal Hammer, who thought their version of the track was an improvement. As they retained these influences, they moved on to Indian folk music, covering the Bombay Rockers' "Baari Barsi".
Bloodywood's music draws heavily from Indian folk culture and Indian cinema, but their songwriting is hardly limited to them, extending far beyond and making it work like you wouldn’t expect. Their high potential to transcend the oversaturation of bands doing "the same thing" in metal nowadays has garnered them a lot of press attention, as well as their ability to expand their horizons without trying. My guess is they avoided most streaming sites, looking to their own culture before exploring other options to consider.
Is it effective? Interestingly, their own documentary "Raj Against the Machine" states that their first tour was a huge success in 2019 when other bands took years, which shows how well they've caught on and gotten advertising with the major magazines. Is their inventiveness sufficient to justify their recognition? The documentary will provide more answers, as well as surprises of their own.
"Rakshak" is epic, not only because of the raw energy of their live performances, but also because of the range of musical styles it encompasses. In reality, it sounds more like what a band active for a long time would have released. Their song and music video for "Dana Dan" hooked me because of their nu metal and Indian influences, as well as their elements of industrial, groove, hip hop, melodic death metal, goth and electro, all rolled into a pulsating ball of energy that overwhelms you from the get-go.
My attention was so captured that I felt compelled to watch another promotional video, “Gaddar”. The groove and hip hop influence were as strong as ever, with Indian folk guitars and robotic keyboards complimenting the heavier riffs. I was amazed by how compelling these two tracks were, so I sought out their album and documentary. "Gaddar" is the album's first track, and it was a fitting choice to introduce the band. The song is a passionate attack on societal and governmental oppression that makes no secret of the band's determination to make things better. This sentiment recurs in the songs to follow.
Bloodywood have had a wider reach than I initially thought as the album progresses. This album combines traditional music from Ireland, Scandinavia and South America, acoustic guitars, new age vocals, gothic metal, electro, synthpop, chanting, thrashing and Latin dance music. Bloodywood doesn't care if their influences are metal or not metal as long as they channel as much vitality as possible. Their energy is directed toward issues others deem more important.
This early in their recording and touring careers, Bloodwood seem to be attracting listeners regardless of ethnicity or geography. I urge you to look into this as soon as possible. –Dave Wolff
Lineup:
Jayant Bhadula: Vocals, growls
Raoul Kerr: Rap vocals
Karan Katiyar: Guitars, flute, production, composition
Touring members:
Sarthak Pahwa: Dhol
Roshan Roy: Bass
Vishesh Singh: Drums
Track list:
1. Gaddaar
2. Aaj
3. Zanjeero Se
4. Machi Bhasad (Album Version)
5. Dana Dan
6. Jee Veerey (Album Version)
7. Endurant (Album Version)
8. BSDK.exe
9. Yaad (Album Version)
Official: https://www.bloodywood.net/
Facebook: https://www.facebook.com/bloodywood.delhi/
Youtube: https://www.youtube.com/bloodywood
Bandcamp: https://bloodywood.bandcamp.com/