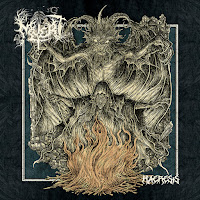 Band: Muert
Country: Spain
Genre: Death/black metal
Full Length: Haeresis
Format: Digital album, CD
Label: Immortal Frost Productions
Release date: January 28, 2022
Oh my! You guys ain’t ready for this!!
What’s up everyone, today we will be discussing the January 2022 release by this Death Metal/Black Metal beast of a band! And the 8 new tracks they’ve blessed the Metal community with.
Now, from the very moment you push play on the intro track your senses are sent into overload by this devastatingly devious instrumentation that can only be described as Lucifer’s personal sonic entourage! The opening track KICKED MY ASS holy shit! Talk about brutal! It’s none stop face melting drum patterns and guitars without a single pause or break to breathe, ironically the intro track is called ‘Metal’ because there really is no other way to describe the pure carnage we are witnessing!
You know it’s my personal opinion (and experience) that when a band tries to identify themselves as both Black Metal and Death Metal it ends up turning into either one of these scenarios.
1. They always lean too heavily to one side of the genre and completely leave out the other.
2. Try way too hard to mash both sounds together, resulting in a ‘forced’ mixture of both which just ends up sounding like unpleasant noise in the end.
But even though that’s normally the case, this band has hit the nail right on the satanic head with this record. They have seemed to found that preverbal ‘sweet spot’ incorporating the best attributes and trademarks of both and blending them NATURALLY to end up with a river that streams both sounds.
You have the vocals which heavily resemble the Black Metal side of things with those heavy growls and raspy screams that could terrify the hardest hardened criminal! Then combined with those absolutely terrifying vocal performance you can hear that bursting instrumentation! Those heavy handed guitar riffs that sound 100 pounds per string just weighting down the world around them, those faced paced, face melting drum patterns that resemble to me ‘Cannibal Corpse’ the Godfathers of Death Metal in their ferocious nature and sickening accuracy and technical ability.
It really isn’t fair that a band this savage, this grotesquely talented can pull off such a remarkably sound, balanced and creative record! It has literally everything a metal head could want from the acclaim of making one of the hardest records I’ve heard this year so far, to having the technical ability to pull off such a fusion to the creative aspect of the patterns and the instrumentation.
If you’re a metal head then this record is a no brainer. Trust me it’s Christmas day and ‘Muert’ are motherfucking Santa Claus. –Corban Skipwith
Lineup:
Ebola: Vocals, guitars, bass
Guayota: Drums
Track list:
1. Metal ¡Enajenación!
2. Axantemir
3. Dámaso, El Brujo
4. La Maldición de Laurinaga
5. ¡La Niña de las Peras!
6. Las Brujas del Bailadero de Anaga
7. El 4° Jinete Sobre la Adelantadía
8. Majanos de Chacona
Muert Bandcamp: https://ebolart.bandcamp.com/music
Muert Spotify: https://open.spotify.com/artist/1AB6krk1qw52NbwXMcL5xy
Immortal Frost Productions Youtube: https://www.facebook.com/Immortalfrostproductions
Immortal Frost Productions Bandcamp: https://digital.immortalfrostproductions.com
Posted by Dave Wolff at 6:17 AM