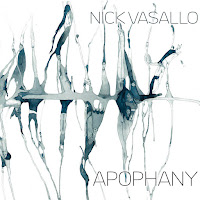 Artist: Nick Vasallo
Location: San Fransisco, California
Country: USA
Genre: Classical extreme metal
Full Length: Apophany
Format: Digital album, compact disc
Label: Neuma Records
Release date: March 18, 2022
Metallica emerged from California’s Bay Area in 1982 to change the face of music forever, just when it was needed. Perhaps history will repeat itself forty years later. An artist from the same area has pooled all his resources for his fourth studio album. “Apophany” blurs the lines between extreme metal and classical music, drawing from a wider range of influences than most bands doing classical metal would dare to explore. By doing so, Nick Vasallo creates something so intense it’s profoundly frightening.
As a member of the Bay Area band Antagony who he helped found in 1998, Vasallo played a key role in the invention of deathcore, a combination of death metal and metalcore. Even then, the band combined death metal with hardcore, grindcore, doom metal, and tribal drumming to push the envelope beyond expectations. Similarly to Metallica, Antagony became one of the foremost underground bands from the Bay Area, sharing the stage with artists such as Incantation, Pig Destroyer, Brujeria, and Cattle Decapitation.
Besides being a groundbreaking musician who helped create a new subgenre, Vasallo holds a doctorate degree, is a classical and film score composer, has won an impressive amount of awards, and lectures and teaches at several universities. A recipient of the President's $21k Dissertation-Year Fellowship of 2010/2011, his compositions have been performed by string quartets and ensembles. His other band, Oblivion, combines death, black, and thrash metal, as well as subtone singing to traditional death metal vocals.
Classical metal isn't a new expression; it has been around since Yngwie Malmsteen in the 1980s. Vasallo has taken the liberty of playing around with both genres, diving deep into their most fundamental nuances to create something that is both open and liberating. After fifteen years and four studio albums, he has finally reached it; still, it has the potential to redefine metal that goes beyond criticisms about limiting oneself or being a so called gatekeeper. "Apophany" demonstrates that you don't have to be a gatekeeper to grow on your own terms.
It took Vasallo ten years to complete "Apophany", the band's next studio album following "Monuments Emerge". This recording was released relatively quietly and without much hype, but its strength is its fusion of chamber music, goth, chant, operating singing, dark ambient and the avant garde compositions of Iannis Xenakis and Edgard Varèse, with the passion and ferocity of extreme metal. Vassal makes this formula work so well that you wonder why it wasn't tried before. One group that came close to this potency was Elend on "Les ténèbres du dehors", another brilliant album from 1996 that I would consider recommended listening.
"Apophany" takes the crossover between metal and orchestral music to an unprecedented level that, yet again, is a logical progression. With its variety of instrumentation and unorthodox musicianship, it is so passionate, hot blooded and fanatical that it would most definitely crush the minds and souls of the most battle-scarred metal fans. As it progresses, it becomes increasingly stranger and more intense, until it feels like it’s crashing in on you. Think of the most surreal horror movie ever released and you have an idea.
Through Vasallo's intensive experimentation, the instruments assume human qualities, conveying dreadful sentiments of isolation, longing, loss, consuming anguish, and despondency. The delivery is not as dark as you might think. In the end, the presentation is as decorative and magnificent as it is disconcerting. I only wish the link to the album on Bandcamp included some kind of synopsis of the narrative Vasallo based the songs on. It’s still unclear but I don’t mind exercising my imagination while listening. –Dave Wolff
Track list:
1. Ein Sof
2. When the War Began
3. The Prophecy
4. ATUM
5. The Eternal Return
6. The Moment Before Death Stretches on Forever, Like an Ocean of Time…
7. Ozymandias
8. Inches Away from Freedom
9. Black Swan Events
Official site: https://nickvasallo.com
Facebook: https://www.facebook.com/nickvasallomusic
Bandcamp: https://nickvasallo.bandcamp.com
Youtube: https://www.youtube.com/c/NickVasallo
Twitter: https://mobile.twitter.com/nickvasallo
Linkedin: https://www.linkedin.com/in/nickvasallo
Posted by Dave Wolff at 11:06 AM