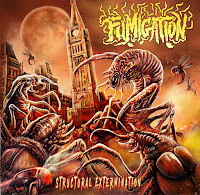 Band: Fumigation
Location: Ottawa, Ontario
Country: Canada
Genre: Death metal
Full Length: Structural Extermination
Format: Digital album
Label: CDN Records (Canada)
Release date: February 18, 2022
What’s on the menu today my friends? Looks like it’s a hot serving of DEATH METAL! Dig in!
Fumigation (Structural Extermination)
So, this is the February 2022 release by this Death Metal band featuring 10 songs all varying in length from 0:44 second to 7:20 and everything in between.
First of all what I love about this album is the tongue and cheek aspect of it, think of a band like Dethklok and how they make those over the top, satire songs about all different kinds of situations and topics well this is the same deal here. Although while listening to this album I wasn’t thinking of Dethklok as much as I was Cannibal Corpse because to me that’s who they sound like more than anyone.
You can hear that real strong ‘meat and potatoes’ style that Cannibal are widely known for, those heavy guitar riffs and thick drum patterns sound nothing short of deadly! I love how brutal, extreme, sadistic and deranged they sound on this album (even if it is tongue and cheek).
Throughout this project they do tend to add a small amount of variety here and there in use of small doses of random noises and sound effects to give certain songs a more ‘out of this world’ feel to them but nothing to go crazy about.
I feel like since they were doing such a satire/black comedy style of Death Metal then adding a lot more big influences and styles would have actually been a pretty sick idea! It could have had the potential to be so much more memorable had they added maybe elements of Synth or Groove or anything funky really to compliment the nature of the album.
But look that’s just me throwing my 2 cents in, I’m sure they did what they did for a reason and as far as the entirety of the album goes there’s nothing actually wrong with it, it’s just given the ‘nature of the beast’ so to speak I felt like it would have benefited more from more variety.
Regardless, excellent edition for a Death Metal album, if you’re a fan of that sub-genre then you’ll absolutely love what they have to offer and as an added bonus you get to have a bit of comedy with your meal! What are you waiting for? Order up! –Corban Skipwith
Lineup:
Dan Rogers: Vocals
Matt MacIvor: Guitar
Vitto Oh: Guitars
Chris Humeniuk: Bass, keyboards
Tom Hansen: Drums
Ryan Michael (Gutted Alive): Guest vocals on Centipede Stampede
Lyndon Quadros (Mors Verum): Guest vocals on Close to a Burrow Below
Jeff "Sludge" Udall (Dievertor/ex-Fumigation): Guest vocals on Pinworms & Anal Burns
Dominic Vorster (Bleeding Spawn/Displeased Disfigurement): Guest vocals on The Barren Hive
Jason Kurz (Bastard Son): Guest vocals on Servant of The Queen
Track list:
1. Vanier Shack (unit inspection)
2. Fly That You Fear
3. Centipede Stampede
4. Close to a Burrow Below
5. Pinworms & Anal Burns
6. Botfly Incision
7. The Barren Hive
8. Mosquitos in my Taquitos
9. Like Moths to a Flame
10. Servant of The Queen
Posted by Dave Wolff at 2:53 PM