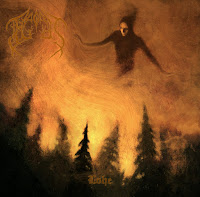 Band: Flagras
Location: Kiel, Schleswig-Holstein
Country: Germany
Genre: Black metal
Full Length: Lohe
Format: Digital, digipak CD
Label: Sol/Deviant Records
Release date: February 22, 2022
This German black metal band released this album to follow their debut EP “Glut” from 2020. With bands like this I’m not surprised to hear the black metal industry in Germany is reaching its peak of activity. “Glut” established the band as having a massive sound full coldness, darkness and decay, something like the direction I would have expected Dark Throne to take after “A Blaze in the Northern Sky” and “Under a Funeral Moon”, or perhaps Satyricon after “Dark Medieval Times”. Still, “Lohe” bespeaks much more to them.
There are many newer black metal bands with different perspectives on how the early 90s sound would have evolved if other directions had been embarked upon. Flagras is one of those bands who keep the raw anti-professional approach to black metal and tweak it so it’s taken seriously, not written off as stagnant. “Lohe” offers experimental perceptions on this sound and how its certain other facets can be magnified to spawn something listeners wouldn’t have thought could be tried.
Flagras’ vitriolic, eroding guitars and unsympathetic vocals are an essentiality to their sound. Even so, such terms as “trve” and “kvlt” and the generic connotations sometimes accompanying them aren’t even taken into consideration here. For example, the atmosphere brought in is nuanced to the extent of being meticulously finespun, giving the surrounding comfortless lack of cheer a sort of conscious awareness, channeling the time tested idea that there are living entities in all that gloom, coming to life the moment things start.
Flagras work overtime to keep their formula simple while becoming something bigger than the sum of its parts. What may have ended up an unembellished recording was constructed into a panorama of textured resonance that’s aesthetically stunning and reaches the kind of ecstasy that’s usually associated with classical or opera, sans the supercilious loftiness that can go hand in hand with reaching this pinnacle. Ranging from seven and a half to ten and a half minutes, the songs provide much room for them to elaborate.
The most major change the band made between their debut EP and their debut full length is widening the production and atmosphere. “Glut” by comparison with “Lohe” had thinner production but the ideas they worked in made up for that. In the two years since the EP came out, Flagras is starting to become noticed for the vibrant melody and dimensional variety brought to their cold dissonance. With healthy doses of synthesizer joining the razor sharp guitars and bottomless bass, the band creates an impenetrable wall of sound that seems alive with the fires of hell, and horrid vocal shrieks like those of the devil himself.
While those synthesizers are low-key and understated they have a way of transforming the atmosphere into a quality as soaring as it is melancholy, as I indicated before metamorphosing absence of light into animated, flourishing quintessence of energy. The contrast between strings and percussion that kick your chest in and ambiance coming in separate vibrations come closer than ever to ecstatic resplendence. In the later songs Flagras even add shades of post black metal, giving them an avant garde distinction. If they were to continue experimenting this way I imagine their sound will continue to become even bigger and more grandiose.
If you’re looking for black metal bands who seek to break the mold of extreme music creating symphonies of desolation give Flagras a chance. “Lohe” is well worth the effort for putting across their collective vision. –Dave Wolff
Lineup:
L.V.: Vocals
Maldoror: Rhythm guitar
HxN: Lead guitar, synthesizer
Beta: Synthesizer
M.: Bass
Mnlths: Drums
Track list:
1. Crupta
2. Kairos
3. Toverie
4. Útiseta
5. Winternacht
Posted by Dave Wolff at 9:37 AM