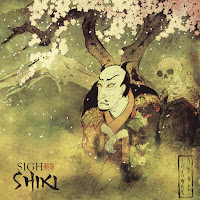 Band: Sigh
Location: Tokyo
Country: Japan
Genre: Avant garde black metal
Full Length: Shiki
Format: Digital album
Label: Peaceville Records
Release date: August 26, 2022
The songwriting and musicianship of Sigh have been comparable to a celluloid nightmare crafted by an asylum inmate since the release of "Scorn Defeat" in 1993. With roots in early 90s black metal, they were progressive before the terms 'progressive' and 'black metal' were even conceived as terms that could be used together.
In the mid- to late 1990s, they spawned releases years ahead of their time, and should be considered milestones for their boundless imagination and painstaking effort. Featuring raw, unforgiving and dangerous elements close to the experimentation of the Beatles in the late 1960s, "Infidel Art", "Ghastly Funeral Theatre", "Hail Horror Hail" and "Scenario IV: Dread Dreams" were raw, unforgiving and dangerous. They personified the 'no rules' principle like no other band of their time.
It was clear from their debut album that the band already knew what they were capable of, and the soundtracks to their vision were just waiting to be created. The uninviting bite of early second wave black metal was also crucial to their self-regulated growth as it showed hints of the near-genius development they would achieve later in their recording career.
Many 'big name' underground bands are more consistent in releasing material, aiming to overwhelm the industry, but Sigh chose to take their time in the 2000s and 2010s, recording just seven full lengths that expanded their boundaries while offering a different theme for each release. Each of them showed greater emphasis on atmosphere, experimentation with prog, thrash, power, and classic metal, as well as elements that were intense, downright bizarre, and resounded of a serial killer planning his next move.
Sigh also developed a penchant for overlapping keyboard effects, arranging unexpected twists and turns, and varying themes from song to song. From beginning to end, they use jazz, classical, trip hop and especially soundtracks to create a deranged motif. "Shiki" brings this variety closer to exemplariness than ever before.
Through their long years of experimentation, Sigh maintained the heavy edge they established on their early albums. All this time the band hasn’t run out of steam and everything they’ve come out with proved successful with fans and critics. This tradition is consistent throughout "Shiki" and for that longtime fans won’t find it the slightest bit disappointing.
After twelve full lengths, Sigh continue to break the mold of extreme metal. Intensive planning, calculated songwriting, precise musicianship, catchy guitar riffs, frenetic percussion, lyrics rooted in Japanese occultism, and most importantly, a diversified genre exploration are all impressively displayed on "Shiki". In addition to having a different sound, each song also has a unique personality. The songs have the capacity to make you feel whatever emotion the band desires for you to feel. Just when you think you know what to expect the rug is pulled out from and they take you in another direction.
After a brief, decidedly creepy intro, they create a similar mood to Celtic Frost’s “Procreation (of the Wicked)” adding an equally creepy myriad of keyboards and vocals like rantings of a criminally disturbed individual. This is followed by a somber hymn to darkness and psychosis, followed in turn by similar vibes to Voivod and Amorphis, then another mood change resonating as tranquil yet foreboding. This is just the first two songs, and “Shiki” becomes progressively more experimental from there.
Throughout “Shiki” you get shades of the genres mentioned above, lyrics sung exclusively in Japanese, bass and drums as engaging and inventive as the guitars and keyboards, an emotional and psychological range from sensitive and empathetic to unbalanced and demoniacal, Middle Eastern ambiance, tribal elements, jazz, psychedelia, synthpop and quite possibly the widest range of instruments ever heard in black metal. And enough twists and turns to fascinate you and make you wonder how they pull it off.
Since Japan has contributed massive amounts of unique originality to underground music, from EZO to Masonna to Church Of Misery to Abigail to Boris and far beyond, it’s only natural that Sigh would emerge at the forefront of Japanese black metal and establish themselves as one of Japan’s committed, pioneering bands. With top notch delivery and production “Shiki” is so malicious, outlandish and erratic it will keep you coming back for more. Hands down it’s one of 2022’s finest metal albums. –Dave Wolff
Lineup:
Mirai Kawashima: Vocals, keyboards, flute, piccolo, clarinet, shakuhachi, hichiriki, shinobue, shamisen, taishōgoto, shruti box, vocoder, guitars
Dr. Mikannibal: Vocals, alto saxophone, soprano saxophone
Satoshi Fujinami: Bass
Frédéric Leclercq (guest musician): Guitars
Mike Heller (guest musician): Drums, bongos, bells
Track list:
1. Kuroi Inori
2. Kuroi Kage
3. Shoujahitsumetsu
4. Shikabane
5. Satsui - Geshi No Ato
6. Fuyu Ga Kuru
7. Shouku
8. Kuroi Kagami
9. Mayonaka No Kaii
10. Touji No Asa
Posted by Dave Wolff at 11:23 PM