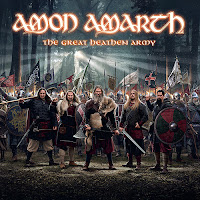 Band: Amon Amarth
Location: Stockholm
Country: Sweden
Genre: Melodic death metal
Full Length: The Great Heathen Army
Format: CD, digipak CD, digital, vinyl
Label: Metal Blade
Release date: August 5, 2022
If I recall correctly it was 2016 when I wrote about Amon Amarth. I was commenting on the tragic love story in "Jornsviking" which had just been released. Also their video for "Raise Your Horns". Despite not being a conceptual effort, "The Great Heathen Army" has a personal meaning for them because it was written and composed during the pandemic. The new album explores newer ideas about Viking cultural history, likening embodying the Viking warrior code to overcoming modern-day obstacles such as Covid's impact on the music industry.
While "Jornsviking" received mixed reactions from fans, Amon Amarth continued to mix things up on each album. 'The Great Heathen Army' explores uncharted territory for vocalist Johan Hegg. In the course of what seemed like a brief hiatus, a much longer hiatus allowed the band ample time to develop. Hegg's wife suggested researching more obscure aspects of Viking culture, and it turned out to be a balanced album between their usual formula and deeper concepts.
We have come to expect crushing heaviness from "The Great Heathen Army," and it is a little more melodious and polished this time around. The Swedish melodic death metal and Viking metal genres are rigid and well-defined; Hypocrisy, At The Gates and In Flames come to mind when it comes to formula; but a keen ear will detect some differences between this album and their earlier work. As a whole, it strikes me as a band making every effort to make their heavy qualities more accessible to a wider audience.
Andy Sneap who has worked in the studio with notable bands including Judas Priest, Megadeth, Opeth, Fear Factory, Dream Theater and Saxon was approached by Amon Amarth to helm the production. His experience worked at burnishing their sound and creating a consistency from the band’s origins in the Swedish sound to added shades of old school power metal (along the lines of Iron Maiden, Helloween and Metal Church). Conspicuous improvements are in “Heidrun”, “Saxons and Vikings” and “Skagul Rides with Me” with more depth and intricate musicianship accompanying the heaviness.
The changes most personal to Hegg and the band are “Get in the Ring” (not to be confused with Guns N Roses), “The Great Heathen Army” (based on the Great Heathen Army of 865) and “Find a Way or Make One”. In these Hegg employs Viking history and mythology as allegory for modern day topics. Again the Covid pandemic is among the most obvious. Despite how it affected the music industry, particularly the underground, in his words, “you can’t stop fighting just because there is something in your way”. For me, songs like “Dawn of Norsemen” exhibited the most balance between abrasive guitars and Smith-Murray lead harmonies.
Amon Amarth made three promotional videos for the new album; I’ll post them below this review so readers can watch for themselves. These videos are available for viewing at their official Youtube profile and information about each of them can be read there. One vid that stood out was “Find a Way or Make One”. Set in an office and worked on with a full professional crew, it exaggeratedly depicts stressful situations at the workplace and the frustrations they can create. Is music a healthy release for it? After everything is said and done I may well still agree with that point. –Dave Wolff
Lineup:
Johan Hegg: Vocals
Olavi Mikkonen: Guitar
Johan Söderberg: Guitar
Ted Lundström: Bass
Jocke Wallgren: Drums
Track list:
1. Get in the Ring
2. The Great Heathen Army
3. Heidrun
4. Oden Owns You All
5. Find a Way or Make One
6. Dawn of Norsemen
7. Saxons and Vikings
8. Skagul Rides with Me
9. The Serpent's Trail