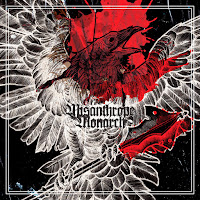 MISANTHROPE MONARCH
Misanthrope Monarch
Independent
For a small state of what Misanthrope Monarch are capable of, the four songs on their debut MCD made me want to hear more. The German death-thrashers assail you, shred your consciousness and depart before you even know what hit you. This is really two full tracks, an intro and outro but it’s difficult to deny the German underground metal community can still produce quality music once you hear it all the way through. It seems this self-titled release together with the track The Omega Embrace was released on Bandcamp to generate a social media buzz before the inevitable release of a full length. The band themselves formed as a three piece in 2014, and how they pulled their act together since then demonstrates their potential as professionals as well as musicians. There is a buzz being generated in print as well as on the net, which includes zine and independent magazine coverage and independent shirt sales in which you can order directly from them. The band’s determination to establish themselves as a force to be reckoned with in metal reflects their undeviating, unrelenting and multi-faceted style of death-thrash. Given the tight riffs, blast beats and occasional hints at Morbid Angel (not to mention the ambient theme introducing the MCD) there is more going on than you’ll experience at first listen. Dissonant chords and multi-layered guitars are only two aspects that establish Misanthrope Monarch as having their own identity in the field of extreme metal, showing the ability to branch out in yet another direction in a subculture that has consistently showed the potential for growth and maturity on its own terms. Visit the band on Facebook and discover this for yourself. -Dave Wolff