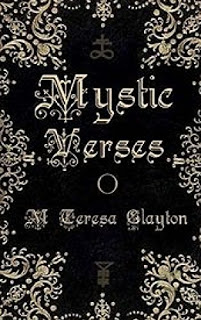 WHY SHOULD YOU BE INTERESTED IN MYSTIC VERSES AND ITS AUTHOR(S) M. TERESA CLAYTON AND HER OTHERS?

We live in a world that is changing at an incredible pace. Everything that seemed normal to us yesterday is not only changed today, but may not even exist in our memory tomorrow.
I am reminded today of what great changes occurred since I was a young woman of 21, then 30, then 40. Much of it was forgotten and replaced by new cutting edge discoveries and new-fangled mechanics.
Who would have thought that we would be cooking in microwave ovens, visiting over Skype on a computer that sits on our lap or we can hold in our hand, or watch movies on a watch-like invention we wear on our wrists.
I still remember phones that hung on walls with six foot cords so we could move about freely while we talked. My first microwave was so big that it took up most of the space on my kitchen counter.
Listening to music on a stick? I was shocked by the Eight-track, then again by cassettes, then again by CD's. What happened to the record and the record player?
The world today is nothing like it was when I was twenty.
But, it isn't like we were not told of these things. Nostradamus, Edgar Casey, Gordon Scallion, The Hopi Indians and many other tribes and peoples have had their share of prophets, visionaries and seers of the future.
It is her opinion that all of us have this innate knowing of all things past, present and future. However, as she tells it, our well-meaning elders teach it out of us and replace it with a predetermined indoctrination of sorts.
How do we, as adults, discern fact from fiction? We were brought up on Santa Claus, Easter Bunny, Tooth Fairy, etc. How do we reconcile this with stories of God, Christ, and other holy individuals? How do we reconcile this with what we, ourselves, feel is truth in our gut without physical proof?
Now comes a woman who is entering her sixties, a mother and grandmother, a teacher, once a very religious woman and now a woman who fearlessly discusses her Otheres and their communications with her.
Why now? I asked her. She is unapologetic about her gifts and willing to discuss her intra-dimensional beings who, according to her, have always been with her. She guards them as she would her children and, as she puts it, they protect her.
What they have given her is a plethora of communicae that she translates and puts in verse. She explains that not all are ready to know everything she has been shown or told. Therefore, she writes in mystic verse.
Why would this be of interest to you?
If you are curious about the metaphysical world, this is a good place to begin your journey. Her writings are not written in Olde English or written in such a way that it requires a Rosetta Stone to decipher.
Her work is much easier to comprehend. She writes beautifully and her works are, without question, filled with just enough mystery to hold your interest and feed your discussions with others who have read the book.
Here is the deeper attraction to the work. There is more to the verses than what one reads on the surface. Like magic, look again, there is something there of great importance that you most certainly missed on the first reading. And, it changes again the second time and the third, and so on.
The year is now 2015. The book reads like it was written in 2015. The co-authors are much older.
Her Otheres are a group of beings that speak to her and show her visions that witnesses say are amazingly accurate. She will only introduce them as a whole of individual beings.
Why should you be interested? Because she will show you what you have forgotten, she will introduce you to your own divinity, she will teach you how to listen, how to decode, and then she will take you by the hand and lead you behind the veil and show you who you are; she will show you what you are. -B. Knight-Forester
Posted by Dave Wolff at 7:12 PM