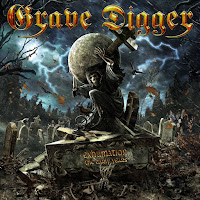 GRAVE DIGGER
Exhumation-The Early Years
Napalm Records
http://www.gravedigger.com
This album release is pretty much a blast from the past. Grave Digger released this new album featuring re-recorded classics from over the past 35 years. It features a lot of tracks from their first three albums and even stemming back to their demos. It also includes two new bonus tracks toward the end that is to be featured in a future 2016 album release. These re-recorded tracks from the heavy metal legends are a great way of showing a blast from the past in a modern way and it proves they still have the same skills as back then. These classics have a powerful and dynamic sound to them still even though it is 2015. It is the ideal thought of what we expected from Grave Digger and that is good old classic heavy metal. Though I can be a little picky on re-recorded versions of songs I will note that these versions sound quite close to the originals. Overall the production and sound of this album throughout is solid. With over 35 years of being together and releasing 16 different full length albums this is a fun way to put it together. On a side note the artwork to this album fits in with the power and heavy metal themes throughout. Be sure to pick it up via Napalm Records and catch Grave Digger on their U.S tour with Blind Guardian. Rating: 9/10 -Michelle Liberati