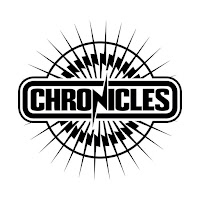 CHRONICLES
Origins: Concealed Fate
New Disorder Music
http://www.facebook.com/chroniclesmetal
Chronicles is a six piece band from the UK Midlands that released this three song EP in 2014. The tagline by which they describe their music is “street mafia geek metal”, meaning their inspiration is drawn from comic book heroes and villains, video games and cult classic films. Aside from classic films it’s an original conceptual approach, barring Stovokor and the Sithfits who base their lyrics and concept on Star Trek and Star Wars, respectively (also to be noted is Entombed’s Wolverine Blues, released in the early 90s). I read the band released a debut video with the release of this EP; a quick Youtube search uncovered their promo video for I See You which can be viewed below. It begins with the vibe of a standard horror/gore flick, with a nameless abducted woman blindfolded and tied up in a cellar somewhere. In a surprise twist the band also appears blindfolded with their instruments when the song starts. This made me more interested in what the band want to say through their music though I have yet to find their lyrics. The atmosphere of the video is not bad; it somewhat reminded me of the remake of The Texas Chainsaw Massacre, another testament to the “modern” stance they put across. You would never expect the band to be comprised of “geeks” at first listen; for a metal EP with a clear 2000s flavor the material is quite heavy and the modern groove doesn’t remove from that. If the band is making an effort to bridge the gap between metal and geekdom this is a major step in that direction. The video’s horror elements play naturally; while you would expect the band to take part in the implied torture in some way or at least provide a narrative, they identify with the woman in her position of disadvantage at the hands of the abductor, only personified by glowing eyes we only briefly see. This puts a twist on metal videos in general, besides being an intriguing plot development. Presumably there are more ideas Chronicles have in mind for future releases and promotional videos, and they’ve shown enough originality to make me interested. -Dave Wolff