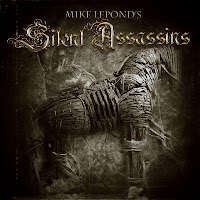 MIKE LE POND'S SILENT ASSASSINS
Mike Le Pond's Silent Assassins
UDR/ADA/Warner
http://www.facebook.com/mikelepondssilentassassins
If your clamoring for some old school influenced metal that kicks some serious ass you need to check out Mike Le Pond's Silent Assassins. Le Pond's solo effort is a gorgeous, expansive landscape of metal beauty. My first reaction upon hearing the opening track, Apocalypse Rider, was "take Accept, Maiden and Motörhead, put them in a cement mixer and spew it out all over an amazing production and boom - you've got it". The feeling was so intense I felt I could run five miles in the time it took me to listen to this song; it was so driving and compelling. And who among us doesn't miss these types of songs... The ones that make us throw back our heads and scream along.
On Red Death we get a taste (but just a taste) of how creative this project could have been when a Raga interlude melds into a crushing bass lead in; really innovative. But then the tune turns into more predictable metal fare. Would have loved to hear the band continue down this path a bit more and maybe mimic some of the Indian influences.
But please don't get me wrong - this is a killer product. Ragnarok goes right for your throat with nice harmonies and is echoed in the titular track, Silent Assassins. That one just about sent me over the edge. These songs make you want to get up and punch a hole in the wall. And this is where Silent Assassins shine.
We hear a few of the metal clichés here as well... The soft played guitar intros and such... But when this band starts out strong and stays strong all the way through they are really contenders. I am partial to songs that sound like a freight train going off a cliff, so the strong, tight and extremely fast openers get me off and running.
The Vocals provided by Alan Teccio are reminiscent of Rob Halford or a very young Bruce Dickinson. But there's something a bit more slick in his delivery - and for this outing it really works. There's one thing not old school about this album, it's the production. Let's be honest - those old metal albums left a lot to be desired sonically. Not so here. Jesus, the drums and bass are on fire and not only lay down a true foundation for the vocals and guitars but give the band a bedrock solid home where they can play around. None of it sounds happenstance. It's precise, logical and mathematical, and it's beautiful.
This album was released in 2014. I'm sad to learn I could have been listening to this powerful music for months already. Check it out.... -Heather Dawson