CD Review: UPON SHADOWS Between the Southern Cross & the Northern Star 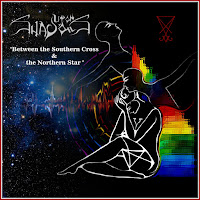 UPON SHADOWS
Between the Southern Cross & the Northern Star
Independent
http://uponshadows.bandcamp.com/
Upon Shadows is a two-piece, all female Black/Dark Metal project hailing from Uruguay. The band features Natalia Arocena on bass, and Tamara Picardo on keyboards, guitar, and vocals. There is an interesting combination here of harsh vocals and Black Metal riffing with plenty of double kick in the drumming as well. But, at the same time-there is also a strong sense and presence of melody throughout the songs that adds another dynamic to the music. Essentially, at times it almost sounds as if the core of the songs represented on the Black Metal end of the spectrum are completely separate entities or pieces from the melodies laced throughout them. It's as if either one could work well on their own, and yet when combined together, they complement each other so well that it actually enhances the listening experience as opposed to taking away from it. The melodies also lend an element of atmosphere to the songs, and yet this is also evident in the Black Metal aspects of the songs too (just in a different way). If you could imagine blending complete chaos with a soothing sense of melancholy and darkness into one unique entity, you might have a fairly decent idea of what is being achieved here. Tamara's keyboard work and the other symphonic elements give these pieces depth. While her shrieking screams and Black Metal inspired riffs, as well as the drums bring the heaviness and harshness of what some might expect from a Black Metal aesthetic. And I think the bass work of Natalia manages to be the glue and an integral part of what drives these songs along. I think this is especially noticeable on a track like Poetic Tragedy Of The Instant where Natalia seems to let loose a bit more, but without sacrificing her part in holding things together and maintaining a presence that is an important part of the pieces that complete this puzzle. I'm not sure if this would appeal to die hard Black Metal fans, but it's worthy of giving it a chance with an open mind. I'm more of a Death and Doom guy myself, but I am familiar with a fair amount of Black Metal. I think this release upholds the Black Metal end of the bargain, but also isn't afraid of pushing genre boundaries farther or making use of melody. Some purists out there may not be into melody to this extent with their Black Metal, but it's certainly worthy of listening with an open mind. And, it doesn't sacrifice the brutality for these other. 7 out of 10 -Alan Lisanti

Track list:
1. Lethargic Loss of Ambition
2. Streets of Despair
3. Unjust Punishment of Fate
4. The Despair & The Fatidic Arrow
5. Poetic Tragedy of the Instant
6. The Music of All Things
7. Mirage
8. Andromeda
9. Vision from the Child