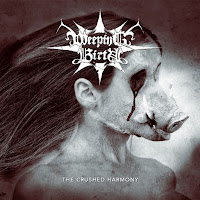 WEEPING BIRTH
The Crushed Harmony
Apathia Records
http://www.facebook.com/weeping.birth
Weeping Birth describes itself as “an extreme metal entity” out of Switzerland. This description kind of sums them up pretty well really seeing as it seems the band is very grounded in Death or Tech Death, and some Black Metal-but, they seem to pull from a wider scope of various influences that can be heard throughout the songs on this release. The fact that there is no “they” in the case of Weeping Birth only serves to make The Crushed Harmony even more impressive. This is because Weeping Birth is just one guy, Vladimir.  There is a bit of a Blackened Death Metal undertone to some parts, namely the opener (Atonality), and Life in a Blood Spasm. Sunburnt has an almost borderline djent or Periphery-esque type of riff to it in parts, but it’s done so in a way that these modern elements don’t come off as outside of the Death Metal or Technical Death Metal spectrum. And they don’t exactly call to mind a band like Periphery either when hearing them. I hear a few feint similarities to a band like Rivers Of Nihil or maybe even newer era Gorguts in regards to the technicality, and dissonant harmony factors that are scattered throughout. There’s also a lot of layers and dueling guitar type parts that offer some extra depth to these songs and the release overall.  The drumming is machine gun like and blindingly fast when it needs or wants to be, but can also settle into more of a groove while still keeping things interesting and dynamic. As for the bass, there’s moments where some melody and various runs and that sort of thing shine through which is nice to hear and always adds an element to the bass overall that keeps both the bass itself and the songs more interesting and balanced.  The vocals are brutal and also not one dimensional, but they are also focused on the goal, and the goal is to go for your throat. The thing that stands out about this release is the technicality and the quality of musicianship, but it also has staying power and depth. Vladimir seems to have a pretty wide artillery of weaponry here at his disposal, and it gets showcased as the album unfolds to the listeners ears. I think this release proves that it’s possible to incorporate more modern elements into the Technical Death Metal genre and still maintain the music’s “Death Metal” integrity. The bottom line is, this guy can flat out play. But, there’s also a strong sense of songwriting and craftsmanship on display here. That’s a balance that a lot of bands, especially within this genre, strive for but sometimes struggle to attain. It really doesn’t matter what you want to call it honestly. An “Extreme Metal Entity” works just fine. It’s heavy, it’s technical, it’s fast, it’s intricate, and it’s brutal. If you’re into Technical Death Metal, or Blackened Death, or Extreme Technical music- check this one out. It doesn’t disappoint. 9 out of 10 -Alan Lisanti

Track list:
1. Atonality
2. A Surface
3. Resurrection of  Resentment
4. Sunburnt
5. Hatefilled
6. Meant to Be Wrecked
7. Life in a Blood Spasm
8. Hollow
9. The Crushed Harmony