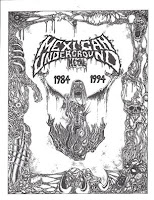 REBORN FROM ASHES: MEXICAN UNDERGROUND METAL 1984-1994
http://www.facebook.com/tony.r.juarez
This is a highly detailed look into underground scenes that have existed in several Mexican cities since the underground’s formative years. This is a must read not only for its educational value, but because it disproves the notion that the underground was entirely comprised of suburban kids who were trying to be tough and starting bands to get back at their parents. Metal itself began in poverty stricken communities and its first musicians were influenced by blues; even in the most brutal death metal there are traces of African American music. The underground in Mexico was born under similar conditions, only instead of fading away because bands became more melodic it went in the opposite direction and gravitated toward heavier music. Clichéd as it sounds, it’s true that these bands were clearly not doing it solely for money, really believed in what they were doing and were not about to cater to the general public. As in many countries, the Mexican scenes managed to weather mainstream trends and survive on its own merit. Look at the section entitled 1988-1989: A New Era Of Brutality which offers a wealth of information about bands, demos and live shows. This chapter is preceded by 1984-1987: The Beginning chronicling the birth of thrash and followed by the chapter 1990: Mysteries About Life And Death Metal about the first DM bands to appear in Mexico. From there this issue covers the evolution in extreme music year by year and the thorough manner in which they are penned shows a tremendous amount of research and gathered memories from Tony Juarez’s involvement. There is a section about Mexican fanzines and a section about the recollections of Tony and many musicians who have been playing in bands for extended periods of time. The editorial by Tony goes back to his discovery of rock and heavy metal which in turn led to the discovery of thrash. In many ways I could relate to this since my own discovery of thrash seemed to set me apart from the kids who were “cool” or “popular.” The front cover of this issue was borrowed with permission from Mutilador Zine and the issue itself combines the writing talents of Tony with the respective talents of Artgore, Mark Riddick, Jesus Garcia, Julian Nunez and Arturo Reyes. Do yourself a favor and contact Tony at the Facebook address above for ordering information. -Dave Wolff
Posted by Dave Wolff at 10:59 AM