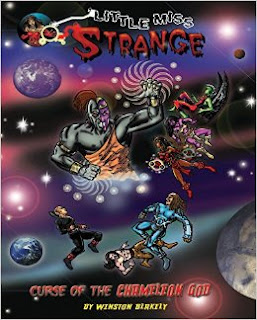 Little Miss Strange: Curse of the Chameleon God
Story and art by Winston Blakely
Co-written by Jemir Robert Johnson
Dark Edge Fantasy
The new adventure of Scorpia the Alien Sorceress (created by Winston Blakely) was years in the making, and is finally available in print and download format. Winston designed the first cover for the fifth print issue of Autoeroticasphyxium; this is the first time the zine’s mascot Faustina Karpathia crawled from her coffin to introduce herself to the readership. We have remained in touch ever since then and followed one another’s respective careers; this in turn has led to a special collaboration for this new graphic novel. Winston has won awards for his extensive work in the independent comic industry and is always at work on new projects. The storyline devised for Curse of the Chameleon God is the finest moment yet for Little Miss Strange. While fighting a demon lord over an ancient relic, Scorpia is chosen for a quest by Kotas the Dragon Lord, and is accompanied by several companions, including a vampiress you may be familiar with. People new to his work will discover Scorpia’s history as a mystic high priestess and guardian of the arcane whose interdimensional travels are well known on her homeworld Satu. You get to meet Scorpia’s friends and allies, namely the warrior Ishtar, Papilloma the fairy princess, the seeker Nergal, the wise sage Eurela, and there’s a guest appearance from Faustina comes from the alternate dimension Scorpia enters in her quest to destroy existence itself. Faustina belongs to an ancient race of vampires alien to our universe. Their god is the lord Bakra who charges Faustina to join the quest to stop the chronal god Merlis from possessing Queen N’dyah even if it means the end of everything. In addition to this storyline you get contributions from Luis Sierra, introductions to each character, an introduction by comic book historian William H. Foster III, a preface by Milton Davis and additional art from Luis Sierra, Derrick Briggs, Jamal Peppers, James Rodriguez and Naser Subashi. The thoughts of Foster and Davis give the readers some more insight into the Little Miss Strange series and where it’s going. -Dave Wolff