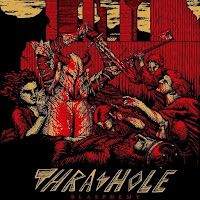 THRASHOLE
Blasphemy
Independent
http://www.facebook.com/thrasholeband
Hailing from Central and South Jersey are the lovely Thrashole with their second offering to the Metal world, “Blasphemy.” The band name itself is balanced perfectly on the fine line of clever and stupid that David St. Hubbins had once described, making it not just one of the best names out there but also memorable as one laughs upon seeing the name. However, that laughing quickly stops once they pick up their instruments as the fearsome foursome are quite a force to be reckoned with.
Thrashole consists of founding members lead singer and lead guitarist Matt Elg and bassist Andrew Campbell, who are joined by their second drummer, Nick Bonsanto for this recording. The addition of lead guitarist Jonathan Catsoulis occurred after recording this EP, and after seeing him live with the band, I am quite eager to hear his contributions on their next release.
“Blasphemy” consists of three brand-new cuts and two numbers that were re-recorded from their “Into The Thrashole” 2012 demo. The “Blasphemy” EP kicks off with “Blasphemy,” which immediately hits the listener with an eerie intro of some percussive delight, foreboding basslines, and a catchy guitar riff before kicking into the song proper. The re-recording of “Chains of Misery” really makes this song come into its proper sound and is a better reflection of the power of this song than the demo version, which could easily be a single featured on the radio without being overly radio-friendly. The Bonsanto march kicks off “Avarice/The Boneyard,” which is a song that showcases all three of the members’ talents and gives all of the instruments some time to showboat without it feeling like a 20 minute CC Deville guitar solo. The ballad, if you can call it that, of “Solitary Confinement” is a nice release from the chaos that preceded it. This song truly reminds me of Flotsam & Jetsam’s “Doomsday For The Deceiver,” adding in melody to the speed without it being overly Power Metal. “The Ender” does just that perfectly, a great and heavy summary of the album, featuring total controlled chaos throughout the number.
Matt Elg does a better Dave Mustaine than Dave Mustaine can do nowadays, with a similar vocal cadence without the nasal quality plus incredible hooky rhythm riffs and stellar lead work. If Megadeth ever decides to pull a KISS and have their founding members replaced to keep the band going, look no further then Matt Elg. Andrew Campbell’s bass tone instantly draws me to that section, as I personally love bassists who prefer a “wet” bass tone. His work perfectly complements the guitar riffs by filling in the appropriate gaps with killer lead bass work but also he knows when to lay back and let the guitars shine through. The monster drumming of Nick Bonsanto is the glue to this record, in-sync with the bass in terms of lying back when needed but shining through when appropriate. Their songwriting is great because they give the songs the flash when needed but also understand that less is truly more.
With all of the great features of this EP, I feel that more attention to the mixing could have made this album even better. The bass is barely audible during the bass fill in the beginning of Avarice/The Boneyard in comparison to its presence throughout the rest of the record, yet it’s all of a sudden bursting the eardrums during the outro and feels like it’s actually louder than everything else that preceded the section. In general, the toms and the gang vocals could prove to be louder in the mix, as well as the general bass level. However, the guitars, lead vocals, and snare and bass drums sound the clearest and most consistent in terms of levels, and the listener is able to differentiate each individual cymbal. So many records in the modern times have the same digital crash sound for all three crash cymbals and this is a nice relief from that sound.
Having seen them live well over a dozen times, Thrashole always somehow manage to improve with each gig, even though I thought that the previous show couldn’t be topped! Thrashole live is an incredible act, but the fullest extent of their magic was not captured on “Blasphemy.” The playing on the record is all 100% on-point, but with a proper remix this release could catapult them to a higher plateau. I wait with bated breath for the next offering from Thrashole, as well as seeing them live on their upcoming US Tour this May. 1987 out of 1989 (on a scale from 1980 to 1989) -Drew Rizzo (MIdnite Hellion)