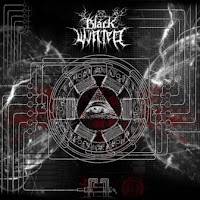 BLACK WINTER
Virtual Vortex
Independent
http://www.facebook.com/BlackWinterBand
This is a two track recording released on Bandcamp…… Black Winter from Greece play a type of black metal that encompasses a few styles. It’s hard to pin down, but if pressed I would say there is some Dissection, Dimmu Borgir influences in there for reference but it does come across as reasonably original in style and execution.
The two tracks on display showcase great control over melody with some quite hypnotic slower parts and the usual droning riffs that most black metal bands use. It is done quite professionally but that is to be expected they have been around since 2000 and have become quite good at their art. I quite enjoyed it, enough so that I went had a a listen to their older material to get an idea of how these guys have progressed, their older material is quite similar to their current release but with rawer recordings. Both work quite well, but if you knew the band before this release not much has changed they’ve just progressed with the quality of recording and musicianship but seemed to have stayed true to the path they started out on.
Definitely worth giving a listen and following where these guys go to next hopefully a longer release! Head over to their Facebook page and give ‘em a like, you can listen to the songs and judge for yourself from there! -Reggae