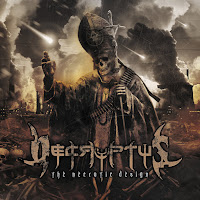 DECRYPTUS
The Necrotic Design
Independent
http://www.facebook.com/Decryptus
This Australian band’s debut EP and follow up to their 2013 demo is an epic piece written and composed in three parts, somewhat like Rush reincarnated as a melodic death-thrash band. The Necrotic Design was recorded from May to June of last year. Released in September, it seeks to shatter the mold of what bands of this ilk are capable of, and is something I wouldn’t mind seeing expanded on starting with their next release. It’s not just that they’re pushing for more complexity in their musicianship, but the Orwellian theme of the composition that interested me. I’ve listened to many dystopian concept albums, but this is the first I’ve heard directly related to Orwell’s novel Nineteen Eighty Four. For all the times there was a film version made, there’s always someone who considers the tale relevant to world affairs. Most of us were around for the Bush administration and endlessly speculated on media activity and the cause of it from behind the scenes. Today seems as good a time as any for another film version, but Hollywood being what it is now, it might not have the impact it did in the 50s or the 80s. Fortunately members of the metal community have had more consideration about this than the average consumer more concerned with the latest tabloid divorce scandal or the latest dance craze. Decryptus channel their thoughts in lyrical form with seemingly enough verses for a full length. It’s not a pretty picture. Images of mass mind control, warfare, revolution, anarchy, chaos, and finally a barren wasteland which is the result of it all is laid bare in a manner intended to fuel thought, on a level of intellect instead of blind rage. The lyrics raise questions about modern society as many more noteworthy releases have done for the last two decades, and there are even passages written as quotes added, taking the concept to the next level. The music these lyrics are set to, especially the buildup at the start, is a near-perfect soundtrack featuring many elements of a thrash opera. One close example I can think of in musical terms is Deceased’s zombie apocalypse Fearless Undead Machines. Definitely one of the year’s finest moments in thrash so far. -Dave Wolff