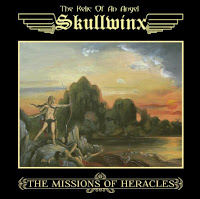 SKULLWINX
The Missions Of Heracles
Independent
http://www.facebook.com/Skullwinx
Here we have a sword and sorcery-flavored power metal epic, generously reminiscent of 80s power metal with some 90s inspiration added. As the title evinces, this concept album is based on the Greek mythological legend of Heracles, adopted by the ancient Romans as Hercules. More specifically it is based on the twelve labors of Heracles, set upon him by his arch enemy Eurystheus on the promise of immortality for him and his family. Their previous album St. George is based on the Greek legend of the Roman solider who became venerated as a Christian martyr. Given their affinity for Greek myths you’d expect the band to be based in Greece; they are actually from Germany. I’d be inclined to say this is a testament to metal’s ability to transcend cultural boundaries. You may be easily reminded of long-celebrated heroes like Manowar and Helloween to a certain extent, without the classical themes that appeared a decade later courtesy of Luca Turilli and Blind Guardian, but there is something timeworn that places you in the story and has a way of making you feel the trials undertaken by the central character. Skullwinx specifically covers the first eight tasks of Heracles (legend has it he faces four more). It would have been good to hear the complete tale and have it end in a much larger finale, however the songs are strong and more than capable. A few of the solos are iffy but the guitars drive the material along as the drums provide a solid anchor. These aspects of the band are what gives The Missions Of Heracles its potential to show their abilities in a big way. I just mean to say there is a lot of room for improvement and Skullwinx will have to work hard to leave a lasting mark on power metal. -Dave Wolff