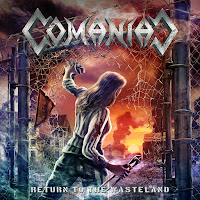 COMANIAC
Return To The Wasteland
iMusician Digital
http://www.facebook.com/ComaniacOfficial
Another band returning us to the glory days of thrash metal. Comaniac hail from Switzerland, from where Celtic Frost was unleashed upon the earth so long ago. Nothing compares completely to the music the thrash underground had spawned from 1983 to 1988, but many newer bands recapture the timeless quality of that musical revolution to varying degrees. Comaniac is one of them if you take into consideration the energy and rejection of convention personified by Testament, Anthrax, Kreator and Gothic Slam. I perceive the same attitude in the ten tracks Comaniac recorded for their debut album, which has been available since February 2015. What speaks to me about Return To The Wasteland is the precision of the riffs and guitar harmonies as the band chugs through the songs, especially those reaching beyond five minutes. The guitars are like fine blades slicing through your speakers to reach your brain, echoed by the tight percussion and appropriate backing from the bass guitar. Most of the lyrics are based on the ages-old conflict between god-and-government versus humanity and the freedom to be human; the best examples of this are the lyrics in “1, 2, Rage”, “Secret Seed”, “Cut Throat”, “Solitude” and “The Rake”. These lyrics are more than enough to make you think about recent doings in today’s world. I would give them credit even without the song structure through which they are delivered to those who are still thinking for themselves. Comaniac still deem it important to question in this day and age of ultra-conservative of radical religion. This gives a much deeper meaning to the title chosen for this album and makes it even more worth checking out. -Dave Wolff