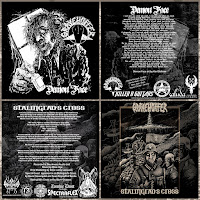 Band: Gravehuffer
Location: Joplin, Missouri
Country: USA
Genre: Thrash metal, crust, grindcore
EP: Demon Face/Stalingrad's Cross
Label: NoSlip Records
Format: 7” vinyl, streaming
Release date: March 29, 2019
Demon's Face builds you up just to knock you down, but the intensity grows until the riff switches up and the feel alters. It's a subtle build, but the opening riff feels like it's leading you to something. The transition back into that riff is as seamless and effortless as it gets. The vocals play a big part in providing this sort of feel and the way they switch up slightly and gain some extra grit at just the right time is probably the secret ingredient to what makes this song work so well. The combination of the music and the vocals as a whole entity work together very well, and play off of each other and with each other excellently. Just when you think that the band has given you everything it has to offer, the song bursts into an old school punk onslaught that is coupled with some Death Metal like elements before it descends into a Doom-laden outro. It's as if one curveball just wasn't enough. The way all of this is executed is testament to the band's proficient bag of tricks that doesn't stick to just one style, approach, or genre. The riffing has a way of lulling you into a false sense of security, or seducing you into a sort of hypnosis before it unleashes its full reach and potential upon you.
Stalingrad's Cross sees the band channel a bit more of a groove based opening riff with harsher vocals in just the right spots that remind me of a few classic Death Metal and Grindcore mainstays. This is, of course, without sacrificing their own uniqueness. It's just reminiscent of those approaches mainly. The lead is well placed and well executed and fits seamlessly in with the bones and flesh of the song. The way the riff that follows slows and disintegrates is a great contrast to the groove of the song, and the added dissonance gives the ending to this track an extra bit of oddness in the best way possible.
Overall, Gravehuffer's Demon's Face/Stalingrad's Cross EP is a solid offering from a band that continues to grow and mold its craft. As a band, they are not afraid to throw a wide variety of heaviness and influence into their material, and follow their own rules and vision. And they do so by making all of their influences and output something that is undisputably their own. Spanning only two songs that clock in at a bit over 8 minutes, the band gives listeners a lot to digest. Yet, they do it in such a way that seems very comfortable and natural for them, and they don't sacrifice quality for ambition. Gravehuffer's Demon's Face/Stalingrad's Cross EP is available now on 7-inch through No Slip Records. -Alan Lisanti