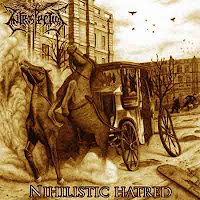 Band: INTROSPECTION
Country: Russia (formerly Brazil)
Genre: Black/death metal
Full Length: Nihilistic Hatred
Label: Independent
Format: Digital, streaming
Release date: August 1, 2018
When I last reviewed Introspection they had completed their latest album “Nihilistic Hatred” and were preparing to release it in two months. A lyric video of the advance track “The Nihilist”, of which founding member Virghon was accommodating enough to forward me a link, had just been released and promised more of a straightforward musical direction. As I listen to the complete album I hear shades of Norwegian black metal along with the Swedish black metal I noticed before. Early Destruction (“Sentence of Death”, “Infernal Overkill”) is an appropriate point of reference, however slight, when discussing possible influences. There is likewise a hint of “Hammerheart” era Bathory in one of the songs, which I didn’t expect at first. The wall of sound this implies is as astringent and unsympathetic as can be expected from bands who have been playing raw black metal for years, and Introspection have far fewer releases available. Virghon’s vocals in particular are fittingly, unyieldingly harrowed, as they should be to equal the forcefulness of the music composed for this album, and channel the commentary of world politics in all its brutal ugliness. Instead of chilling you with occult tales, Introspection consternate you with images of gunfire, acrid skies and dead, mangled corpses in a far more realistic manner. As on their older releases, Introspection heave the listener into these scenarios with the ruthless suddenness of an unprecedented missile warning, with the presentiment that it’s all over for humanity. As a warning against where the human race is heading and where it will end up should it continue on its present course, it leaves a lasting impression. What I still find most imposing about “Nihilistic Hatred” is its literary reference, namely Ivan Turgenev's “Fathers and Sons” and Fyodor Dostoevsky's “Demons” as I indicated in my last review of the band. I imagine both these books should be read cover to cover for the listener to fully appreciate Introspection’s message here. -Dave Wolff