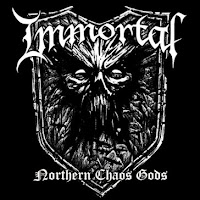 Band: Immortal
Location: Os/Bergen, Hordaland
Country: Norway
Genre: Black metal
Full Length: Northern Chaos Gods
Format: CD, limited edition digipak, streaming
Release date: July 6, 2018
After reviewing Abbath’s new full length “Outsrider” and hearing Demonaz Doom Occulta reformed Immortal to release new material, I wanted to hear “Northern Chaos Gods” for myself. Needless to say, I was not disappointed. I won’t dictate which album is better, but I will say that “Northern Chaos Gods” is a villainously executed return to form and worthy of Immortal’s history. It picks up where “Pure Holocaust,” “Battles in the North” and “At the Heart of Winter” left off, only cleaner, tighter and more extreme. From the eight shredding tracks comprising it, it’s clear age hasn’t been a detriment to the band’s musicianship after ten years; neither has the recent shoulder surgery Demonaz had to undergo for tendinitis. Here he takes the massive task of writing the music in its entirety and all the lyrics, as he did on his solo effort “March of the Norse” in 2011. Naturally there will be similarities to the Immortal of old, cleverly hybridized with enough similarities to “At the Heart of Winter” due to Horgh’s commanding, unfaltering percussion. Incorporating latter day Immortal is a good idea as it further legitimizes the chaotic storms the band formulated in the 1990s, according this aspect with the monumental grandeur of the 2000s and building a sound crossover between those eras. Albums from yesteryear captured the frozen atmosphere and never ending snowstorms as an isolated phenomenon happening in a small part of the world. “Northern Chaos Gods” extends it to every corner of the globe. As to whether Demonaz fills Abbath’s shoes as a vocalist, I personally miss Abbath’s presence but his absence is not as bad as, say, Slayer without Tom Araya. As Immortal’s new frontman, he has an abrasive approach that is distinctive but doesn’t stray far from the formula. He enunciates well and you don’t need the lyric sheet to understand him. I like the way his lyrics continue the narrative of past albums as the blizzards spread across the planet, as it was promised they would long ago. I wouldn’t hesitate to recommend this to longtime fans who want to travel the forbidden lands of Blashyrkh once again. -Dave Wolff