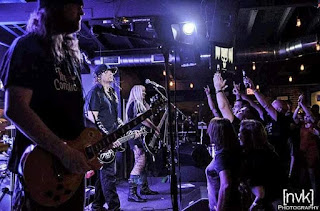 Band: Shallowpoint
Location: Lenoir City, Tennessee
Country: USA
Genre: Rock, metal
Single: Determined Angels
Recorded and mixed by: Travis Wyrick, Lakeside Studios, Knoxville, Tennessee USA
Release date: July 4, 2019
“Determined Angels” is the second official single from Shallowpoint since their full length “Infringement” was released in 2013; the first new single was “Fractured” (2016). Writing material has been extremely slow going for the band, though not for laziness or lack of excitement for composing. Their time has been spent hooking up with producer Travis Wyrick and sharing stages with Sevendust, Hellyeah, Alice Cooper and other name acts. So far this has worked for them rather than trying to churn out something every other month and having it sound mediocre. From the start Shallowpoint has consistently generated reflective, inner-directed and thoughtful songs (“Nothing Left,” “Self Inflicted,” “Broken Life”) and this is what you can expect here. Going by their growing social media popularity they’re evidently striking a chord with more people. If you’re familiar with those songs they’re what alternative rock could have been if it hadn’t become a trend, made relatable for fans of southern rock and metal. Despite their intense brooding and rumination, you somehow come away from those songs inspired to succeed independently. The first track completed for their upcoming EP, “Determined Angels” dives ever deeper into the quagmire of internal chaos and confusion that everyone skirts around the edges of in their souls. As always the band doesn’t preach about making the world a better place or expect you to change toward that goal. Rather it maintains the simple message of believing in yourself and what do you. Keeping your dreams alive and working toward them despite persistent admonitions that you’re wrong and should do as everyone else does. Remembering the immortal words of AC/DC, “it’s a long way to the top if you want to rock and roll,” this band is aware that you have to crawl before you can walk. Fame is fleeting unless you work to become famous and stick to your guns as a bottom line. As much as it shows how Shallowpoint have gotten to know each other and tightened as a unit, with more precise guitars, keyboards and drums, “Determined Angels” resonates of having been written by musicians who know what they’re doing and intend to succeed for the long haul after ten years of building from the grass roots. -Dave Wolff