Promotional video review: HELL'S GUARDIAN "As Above So Below" by Ghoul Shadows 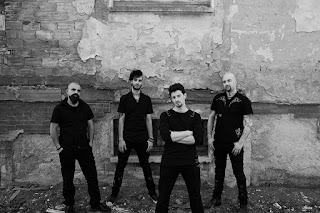 Band: Hell’s Guardian
Location: Edolo (Brescia), Lombardy
Country: Italy
Genre: Melodic death metal
Single/Video: As Above So Below
Fourth single from their full length “As Above So Below” released on Record Union September 14, 2018
Produced by Freddie Formis
Vocals produced by Marco Pastorino
Orchestrations by Samuele Faulisi at LyricArt Production
Recorded at Media Factory by Fabrizio Romani
Mixed and Mastered at The Groove Factory Studio by Michele Guaitoli
Directed by Lucerna Films
Actor: Frank Maiello
Release date: July 16, 2019
The latest single from the album of the same name is exactly what you want from a metal band. They play it straight down the line. No fancy gimmicks. No nonsense - just pure metal. This is what you are here for. The song is very reminiscent of early “My Dying Bride” in my opinion and if you like them you should definitely check Hell’s Guardian out. Formed in 2009 Hell’s Guardian has slapped us in the face like a not-quite dead turkey at Thanksgiving which makes us sit up and take notice. Like whoa, what the fuck? Did I just get slapped in the face with a turkey, yeah you did! Now shut up and enjoy this band! The double kicks from drummer Dylan Formis assault your ear cavity like a jack hammer without an off switch. Cesare Damiolini vocals preach to metal masses like a pissed off fast food attendant; sick of calling your order out even though you are five feet away and have yet to hear him; full of passion and vile! He joins Freddie Formis on guitar to plough through the quite Sunday neighbourhood with a driving guitar that was born to shred. And then bass player Claudio Cor moves you like an idling car engine which makes you wanna hit the road. Fuck dude, can we go back to when metal was good? Hell’s Guardian have! You should too! The only down side I could hear from this track was that they did play it safe but when you want your metal “metal”, why change a formula that works? 4 outta 5 fucks to give! -Ghoul Shadows

Check out Ghoul Shadows’ horror stories at Tales of the Twisted on Facebook and Wordpress.