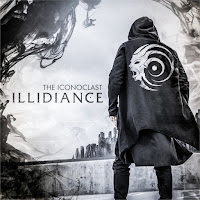 Band: Illidiance
Location: Taganrog
Country: Russia
Genre: Modern electronic core metal
Full length: The Iconoclast
Label: Independent
Format: Digital, streaming
Release date: July 16, 2019
Illidiance from Taganrog, Russia started as a symphonic black metal band in 2004, having formed of the remains of Russian melodic black metallers S.C.A.R.D. S.C.A.R.D. released three demos from 2000 and 2003. Formed by Dmitry "Xyrohn" Shkurin, Ilidiance continued to expand on S.C.A.R.D.’s black metal theme until around 2008-2009 when their EP “Synthetic Breed” tested the waters of what they termed “cyber metal.” It was this time I began corresponding with Shkurin and interviewed him for the print incarnation of this zine. Illidiance was a band that took chances, compounding their futuristic approach with lyrical concepts about artificial intelligence and transhumanism (enhancing human intellect via technology) and the possibility of Armageddon for their 2010 full length “Damage Theory” and their 2012 single “Neon Rebels.” Perhaps Shkurin and Illidiance felt they carried those concepts as far as they could; after those releases they spent 2013 to the present exploring other lyrical concepts with a handful of singles. Released this year, “The Iconoclast” continues to experiment with cyber metal, now termed “modern electronic core metal.” There is still a futuristic theme here, cold and bleak, representing a world over-dependent on technology. By now the cost to humanity is obvious, and it seems there is no turning back from human folly. It’s an Armageddon far worse than that shown in the “Terminator” movies. It goes back to classic science fiction in which technology was created to make human life easier but becomes humanity’s guardian against its will. As before, this concept is enhanced by a myriad of keyboards and electronic sounds. While they were more prominent on past releases, they exist mostly as support for a guitar heavy sound (with occasional acoustic guitars), some classic metal and melodic, nu-metal-ish vocals. It’s mainstream-friendly but not commercial, still retaining potential to challenge musical boundaries. This attitude is reflected by the lyrics, which from what I gather symbolize man’s determination to persevere through any catastrophe. The impressions I get are of the last man alive under technology’s shadow. We never meet him face to face but he lives, seeing a nightmare future world where everything is mechanized and the human spark is almost completely snuffed out. As the final beacon of humanity’s hope, whether through spiritual faith or individual will, he will see humanity experience its rebirth. You might get similar impressions from the tracks “Modern Iconoclast,” “When There Is A Thunder,” “Last Dawn” and “Out Of Coverage.” “The Iconoclast” is yet another album that has something for listeners of aboveground and underground metal. -Dave Wolff