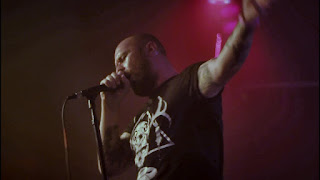 Band: Allegaeon
Country: USA
Genre: Technical melodic death metal
Video: Proponent For Sentience
Filmed live by Frank Garcia at Reggie’s, Chicago, Illinois, USA, July 14, 2019
Release date: July 16, 2019
These days it’s less of a rarity when I’m introduced to bands with one of their videos, promotional, lyric or live, but I’m more often compelled to hear more when I do. This video filmed by Frank Garcia (Blood Of The Wolf) is not my introduction to Allegaeon; that happened in 2016 when I came across their cover of Rush’s “Subdivisions”; but it’s the first I’m hearing original songs from them. The original songs in question are from the same album as the Rush cover, Proponent For Sentience. Allegaeon do all three chapters of the album’s epic title piece at a show at Reggie’s in Illinois this month. The picture and sound quality were such that I sought Proponent For Sentience on their Bandcamp profile to hear the studio versions. Onstage the band handles the material they recorded expertly, without missing a single note. This made so much of an impression I went on to listen to Proponent For Sentience in its entirety. This is a band you should listen to even if you’re not into death metal, as they cross brutal/technical death metal with melodic death-thrash, progressive metal and even progressive rock and classical guitar. And to such an extent that classifying them would be a task. What’s particularly impressive is how they combine 90s brutality and atmosphere with a 21st century sensibility. They push it ever farther while undermining expectations of extreme metal appealing to the most base and immature tastes. Allegaeon’s range and talent makes you want to challenge anyone to maintain intensity, blast beats and brutal vocals for eight minutes at a time before passing judgment, and add top quality acoustic guitars, soaring chorus and a mood similar to The Omen on top of that. Allegaeon do all of this at their show and continue to promise higher creative plateaus for extreme metal. The band’s latest album Apoptosis was released this past April. -Dave Wolff