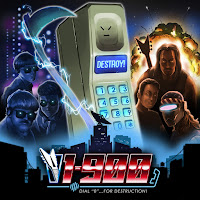 Band: 1-900
Location: Poughkeepsie, New York
Country: USA
Genre: Synthwave metal
EP: Dial 0...For Destruction
Format: Digital album
Label: Independent
Release date: 2020
There is actually a metal band out there that is deep underground in a secret US government research facility looking to harness the power of 16-bit energy with a scientist named Jacob Murdock with his colleagues somewhere in Reno, Nevada from 1989 that are using the power of metal to create more metal using a parallel dimension which unknowingly leads to letting in the forces of otherworldly evil from an alien dimension. It is all taking place in this lab while the leader of these evil dark creatures summons his powers into a phone line to brainwash the local citizens and becomes known as the sinister, Operator!
Mind Blown! What a concept. You can expect more of this on the other tracks on this album. They give you more detail of what it is exactly going on in the story they are portraying to us within the message of their music. This band that is originally from Poughkeepsie NY has a very wild imagination. Even if the story they tell you in the music sounds like it could be remotely true!
The mind of Brett Miller knows no limits. He is regarded highly for his many solo act efforts with his alluring cosmic progressive metal style & also being into all things metal in the scene with a very eclectic musical resume. He is also a professional guitar teacher that is providing a service to all inspiring musicians worldwide. An expert in his field with an educated musical background and gifted to the very core. This is a completely new metal band created by him for this concept album, "Dial 0...For Destruction", by 1-900!
This group has made something unique within the realm of power metal with technicality you can find in progressive metal but with a mixture of synthwave from sounds you normally would only hear in the 80-90s heydays of video games. The feel of the music is epic in its presence, but also provides this clever sense of a complete video game or comic book storyline to it. It incorporates something more original to offer not just in the genre of metal but also to the electronic retro wave genre that is known for acts like, Power Glove, Kavinsky, or Shio-Z.
When I see music taking a form of some sort that has hints of cyberpunk to it I can find interest in it. It is also rarely often you get something like this that does not fall into either category. It's like a soundtrack to a Super Nintendo or Neo Geo game. Remaining as its own thing within the spectrum that is so vast these days in the heavy metal and electronic music scenes. The album release is from 2020. As far as the storyline of this album goes, when it was released to show to the public it was in 1989.
Amongst all the madness behind what happened to them while using the metal, they were creating with pure 16-bit energy which unleashed itself through this portal in the lab they were all in. It ultimately ended up opening a parallel dimension that clashes genres of music in the fictional world that Brett & his band has created. Its timeline revolves around the time of March of 1989 in Reno, Nevada. Which is also the same area that is famous for the Roswell UFO Crash. Great choice! This album is straight forward in the realm of metal but gives you something completely fresh to think about. Which is what I like very much about it. I recommend it to anyone getting into metal, electronic or are longtime fans of both. My own personal message I got from this album is, to try new things. Always look outside the box. You never know what you could come up with or be missing.
Thanks for that, 1-900! \m/ -Daniel Ryan
Lineup:
Brett Miller: Guitars, effects, programming, vocals
DD Bass: Bass
Track list:
1. The Operator
2. Hint Line
3. Modem
4. Synchron Slaughter [Bonus Song]
Posted by Dave Wolff at 12:00 AM