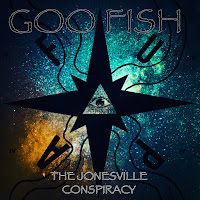 Band: Goo Fish
Location: Roughdale, Louisiana
Country: USA
Genre: Indie Rock
Full Length: The Jonesville Conspiracy
Format: Digital
Label: Independent
Release date: October 2, 2020
“The Jonesville Conspiracy” seems like a conceptual album in which the concept is loosely based on conspiracy theories about the Illuminati and the Bilderberg group, set to a backdrop of grunge rock, stoner metal, neo-psychedelic electronics and drones, and spoken word, along with some rap. The tale is about a shady character called the FUPA who lives in an isolated township called Jonesville. He seems to be some kind of magician who is manipulating world events through spiritual or mystical means. The FUPA is presented in a way that is intentionally vague. All you know about the FUPA is where he lives, what he’s doing, and how his actions apparently bear on other members of the community he lives in. And only through him can you achieve inner peace and understanding, or so he says. If the Bandcamp or Youtube links provided some more background on this, I would have more to go on as to whether he’s working towards the enlightenment or enslavement of mankind (you’d be inclined to suspect the latter possibility). But Chris Spann (the creative force behind Goo Fish) decided for the most part to keep this ambiguous, to allow the listener to decide for himself exactly what’s going on. Instead of being a detriment, this vagueness makes you want to learn more. I started searching for some more information and found it at the official site of Radio Roach. There you read about ceremonies taking place in Jonesville, and other residents of this township mysteriously dying, but again it’s unclear whether or not the FUPA is directly responsible for it. Formed from a series of recordings dating back twenty years, the soundtrack illustrates the storyline like part of a much larger narrative that began to gestate on past releases and may be continued in the future. It also makes you think about what visuals would fit the layers of sound in each chapter. If there is going to be a continuation I’d be interested in hearing it, just to know exactly what the Jonesville Conspiracy is. –Dave Wolff
Lineup:
Chris Spann: Vocals, all instruments
Track list:
1. An Indictment of the FUPA
2. You're in Jonesville (FUPA 2020)
3. Coronation of the FUPA
4. Catahoula Desert Queens
5. Should / Shouldn't
6. Uncle Joe
7. A Despondent Theme For The FUPA