CD Review: MORTAL STRIKE For The Loud And The Aggressive 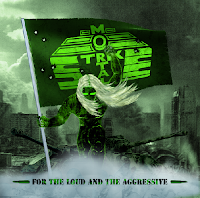 MORTAL STRIKE
For The Loud And The Aggressive
Independent
I almost immediately got impressions of a posse of metalheads going out into the street heading to a local show armed with beers and boisterous voices. Thus it was no surprise to learn Mortal Strike are from Austria as most Teutonic bands have that party vibe. It seems deeply ingrained in their songs, all the way to the molecular level (a reference to a remake of a classic 50s horror movie with Vincent Price - does anyone get it?) This band’s chosen moniker and the album title couldn’t be more appropriate for what to expect within. They go for the jugular from the first note onward, and make no uncertain terms about their intention to lead the thrash metal resurgence to complete and total world domination. Listening to the title cut, Against The Wall, Smash The Tyrants - Storm The Gates and One Against All only once is more than sufficient to convince you of their old school determination to be noticed in metal communities the world over. Butchered humans in the death metal universe will reassemble when exposed to those songs and long expired, corpses in the black metal universe will awaken from their eternal slumber. False metal wimps will simply wither as their bodies are reduced to viscous green slime, haha. Mortal Strike’s formula is an exquisite balance between thrash riffing and power metal style lead harmonies. The entire album is near perfection in terms of pure energy and enthusiasm; my only complaint is that the vocals sound a little too similar to Tom Araya’s in Slayer’s classic repertoire, but the musicianship makes up for that in spades. There are even blast beats to be heard here and there and that cover by Tankard at the end (if you get this on CD). An essential release for thrash enthusiasts everywhere. -Dave Wolff