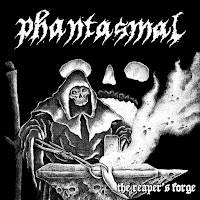 PHANTASMAL
The Reaper’s Forge
Independent
http://www.facebook.com/phantasmalmetal
http://phantasmalmetal.bandcamp.com
phantasmalmetal@gmail.com
This U.S. band released this as a cassette demo in 2014; this release I’m reviewing is a CD reissue with two additional tracks. Since the release of the original demo Phantasmal made a few compilation appearances: Let's Start a War... Vol. I (War On All Fronts Prod.). Necrolust Vol. 5 (Metal Hammer) and Spring Offensive 2015 (Legion Canada Records). Founding member Psychopomp is touting Phantasmal as black metal; however the musicianship and production speaks more of a style of black/thrash metal similar to early recordings by Witchery and The Crown. I also perceive an old school theme reminiscent of Kreator and Destruction. The finest CDs to me always seem to be those that take me back and celebrate the past; The Reaper’s Forge does so with a vengeance. The mixing sounds relatively clean, without atmosphere and a slight flavoring of rawness. The guitar chops are tight and sharp which adds to the appeal of this CD. The lead vocals are another aspect that leans closer toward old school thrash; again the style reminds me of Kreator and Destruction in their heyday. I note the lyrical content here as summoning imagery that was prevalent in thrash in the mid 80s; lines often came to my attention and had me thinking of those old tales of wizards and sorcery in these songs, especially the two added for the reissue and Queen Nightshade. I can imagine the band generating an immense amount of energy playing these songs in front of an audience, inspiring headbanging and pit activity at an increasing level with each passing second. Psychopomp was recently interviewed for Hombre Rancio Underground Metal; a lint to this interview can be found on Phantasmal’s community page. -Dave Wolff