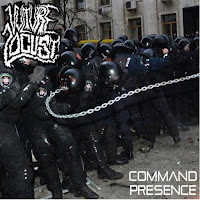 VULTURE LOCUST
Command Presence
Independent
http://www.vulturelocust.com
http://www.bigshinyprison.com
Vulture Locust is the brainchild of musician/author Ryan Bartek. Bartek founded it in 2012 following his experience in A.K.A. Mabus and Sasquatch Agnostic. Bartek is also the author of The Big Shiny Prison and Fortress Europe which can be downloaded online at bigshinyprison.com (the indepth interview I did with him is also there). Completing VL’s lineup are bassist Max Snyder and drummer Nathan Pogue who previously worked in the band Self Murder. Vuture Locust’s debut EP Cold Civil War was released in 2013, followed by their debut full length We Need To Talk in 2014. 2015 saw the release of their current full length, a recording that shows no slowing down or lack of energy on their part. While I researched it I read a reviewer comment that the album in the vein of Napalm Death’s classic Scum. I am still a big fan of grindcore from the 80s-90s, so reading this enhanced my interest in this. Not for the sentimental value alone, but also to see how they compare to bands from that era without directly copying them. It’s obvious from the start that while the attitude is similar, Vulture Locust have their own sound and don’t try to follow anyone else. Furthermore they accomplish everything you hear organically, without drum programming, as they add elements of thrash, doom and death metal. Many bands have branched out similarly, but VL keeps things fresh with the punk-like conviction of their musicianship. The material feels as if any second things are going to degenerate into complete, utter chaos but the band remain consistent throughout the album. The lyrics are arguably the most punk quality Vulture Locust have to speak for, diving deep into conspiracy theory, Islamic fundamentalism and Monsanto so convincingly you’ll be inspired to look up the subject matter on the net. The 1988 science fiction movie They Live is a personal favorite (as are others by John Carpenter) and the reference in They Live We Sleep is a nice touch. Command Presence can be streamed on Youtube alongside selections from Bartek’s past projects. -Dave Wolff