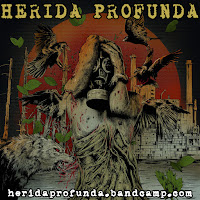 HERIDA PROFUNDA/HELLBASTARD
Picture disc split
Vleesklak Records (Belgium)
Tercer Mundo (Chile)
Here And Now Records (Italy)
Incredible Noise Records (Germany)
Phobia Records (Czech Republic)
Grind Your Mind Records (Brazil)
NIC Records (Poland)
783 Landsberg Hardcore Crew (Poland)
Svoboda Records (France)
Civilisation-Records (Germany)
D.I.Y Kolo Records (Poland)
Mundo En Kaos Records (Mexico)
Pandora Records (Germany)
WOOAAARGH (Germany)
Piotr Kwiakek of Herida Profunda provided me a great deal of background information on this split release and both bands involved in it with the digital copy he sent me. The e-package was complete with cover artwork, lyric sheets, band merchandise, posters and release info. Herida Profunda is a crust/grind/metal band whose members are from the UK and Poland. Hellbastard is a punk/metal band from the UK. Together they contribute to a formidable split that’s bound to make significant waves in metal, punk and grindcore communities everywhere. As you see there is a tremendous effort to distribute this split in several countries around the world. Just from that you know they are confident in the material and have their act together (especially Hellbastard who have steadily released music since 1986). It’s a matter of time before they find US distribution to further spread the chaos. HP’s varying influences make for a post-apocalyptic style that is raw, experimental and adept at presenting imagery of man’s greed and lust for power finally being the downfall of civilization. Bands from Poland and England have distinctly differing mindsets when it comes to quality extreme music. In these songs you’ll hear what happens when musicians from both countries meet to share their ideas and spawn something original. Hellbastard is said to have pioneered crust punk around the time Amebix began playing anarcho-punk. Their demo Ripper Crust is credited as the archetype for what the genre would become. Disbanding in 2000 and reforming in 2007, they have amassed enough experience to record solid compositions that incorporate each era of underground music, especially the punk, hardcore and thrash eras. With said maturity comes energy that doesn’t lose sight of itself as their songs progress. Besides the diversity each member brings to their respective bands, their differing approaches to punk and metal gives you a broader view of extreme music. -Dave Wolff