CD Review: SPELLBOUND Nothing But The Truth 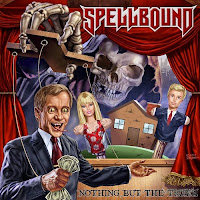 SPELLBOUND
Nothing But The Truth
Bret Hard Records
http://www.youtube.com/watch?v=SX8d97rwnOE
http://www.facebook.com/spellboundalliance
Since the early 2000's Spellbound has released 2 full length albums. They took a break from 2009-2012 but still kept a little quiet till this year. Spellbound is back with a newly released album entitled "Nothing But The Truth". This German Thrash Metal band is currently signed to an independent label called Bret Hard Records.
Since making a return to the metal scene the new album has been intense and shows a lot of ambition. Despite waiting 8 years for a new album this one was worth the wait.
The riffs in this album are very strong riffs and accompanied by the vocals that go along with it. The band to me sounds like a modern Kreator, Destruction, Testament and Dark Angel all mixed together. A lot of the tracks are nicely paced but technical at the same time. Any old school Thrash fan would definitely like this release. The different kinds of blend they offer make them stand out from a lot of other bands and makes them unique but in a good way. On a side note credits to famous metal illustrator Ed Repka for the amazing cover art to this album.
Be sure to check out the album and check Spellbound out on Facebook for updates. -Michelle Liberati