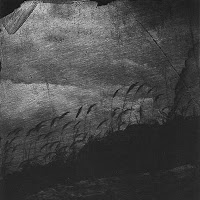 VSPOLOKH / VIKHR
Amongst Mossy Stones
Purity Through Fire
http://www.facebook.com/Purity-Through-Fire-171743799539940
Amongst Mossy Stones is a split release from two Russian black metal bands, Vspolokh and Vikhr, released in 2013 in a limited run of 75 copies. While I’ve been listening to Russian black metal since the late 90s I know little of Russian heathenism, with the exception of a few deities I read about in The Satanic Rituals. This being so, I can’t offer much insight into the bands’ viewpoints on the subject unless I found interviews with them. At Purity Through Fire’s official site I found more information about the first band: Vspolokh’s lyrical influence stems from Slavonic mythology, nature, mankind’s decadence, melancholy and personal despondency. For more information about Vikhr refer to Der Schwarze Tod, a Russian label dealing in black, folk and pagan black metal. The impressions of nature and heathenism are captured in traditional black metal fashion. I was reminded of early Satyricon (The Forest Is My Throne, Dark Medieval Times) besides rawer bands like Fimbulwinter and Vlad Tepes. Vspolokh establish the theme of nature from their intro onward, presenting visuals of a vast forest with cold winds blowing and ravens calling in the distance. Granted this approach has been done countless times in the last twenty years, but it still manages to sound effective here. Check out the pagan melodies of the guitars and the vocals which go a long way toward producing those mental images. Vikhr’s contributions are more straightforward, with higher pitched vocals and more abrasiveness to go with the harmonies. There is less atmosphere and more of an in-your-face attitude in the musicianship and production are, and similarities to Burzum and Darkthrone. The bass and drums are more prominent and upfront, and there is more of a garage/basement feel as if they recorded their songs live. Vikhr revisit the foreboding landscape established by Vspolokh, with flute and other instruments bringing the darkness closer to your soul. These vastly different interpretations of pagan black metal are delivered with equal conviction. -Dave Wolff