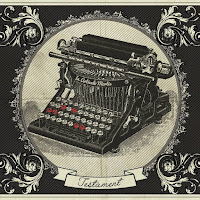 IN ARTICULO MORTIS
Testament
Herbert West Productions/Solstice Promotions
The French black metal band In Articulo Mortis was active in the 90s releasing two demos and reformed briefly in the 2010s to release Testament (they reportedly recorded a full length in 1997 but it was never released). The album was first released in 2012 and limited to three hundred copies. Last I heard you could purchase Testament on Amazon but it you missed it you can stream it on Bandcamp as it’s been available there since last October. I read they decided on the Bandcamp release to seek a new audience; this news was related to me from Noemy of Solstice Promotions who introduced me to them out of the blue. For a band that didn’t follow up on their work for whatever reason they’ve shown a fair amount of resilience. The album starts on a good note if nothing spectacular. Mid tempo black metal with a rough guitar sound and production job proportionate to 90s cult bands like Maniac Butcher and Thy Serpent. What heightened my interest were the wistful parts of “Le don obscur” and “Succubus” that sounded slightly gothic with guitar solos calling attention to some goth influence. As the latter song progressed I became increasingly embroiled in the dysphoria I experienced and it slowly dawned on me where In Articulo Mortis were going here. While rough and rudimentary, it is a downward venture into dejection, dashed hopes and forgotten memories that slowly crawls into your mind enshrouding you before you realize it. The atmosphere that complements the storming onslaught of “La rose et le marbre” is the album’s transcendent moment, manifesting the most promise for maturity. The gradual buildup of melancholy is the mark of a band fully aware of what they’re doing. The black metal elements likewise increase in their vehemence during the course of “My underwater queen,” “Embrace the reapers wrath” and “Lunar State” while their mournful bearing doesn’t fade over time. By the time the album concluded I was convinced it was a stroke of near genius. This is one band I would like to see continue to evolve on their own steam. -Dave Wolff