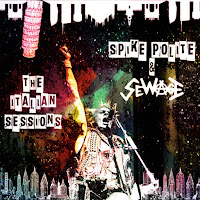 SEWAGE
The Italian Sessions
Independent
One of NYC’s longest running punk bands are still pushing ahead, and I still make a point of keeping up with them since I met Spike Polite in 1996. In case you didn’t read it when I interviewed him for AEA in print, Spike founded the band in the early 90s (as Humyn Sewage) and one of their early gigs was opening for GG Allin in his final performance at the Gas Station. I missed that show but have seen Sewage many times and they always delivered. Live staples like Detox Doll, Subway Surfin’, Mental Injustice and Punk Religion were rerecorded for the new full length The Italian Sessions and these are the greatest versions yet. Punk was a different beast in the city when Sewage started. The raising of property values and subsequent compliance with upper class virtues was in its infancy with NYC mayor Giuliani’s Quality Of Life agenda. The extent to which it has increased would have seemed like a nightmare. As I watched these gradual changes and felt the culture shock felt by many, I would have liked a rerecording of their single What Happened To The Punk Rock. But as they say, this complaint is minor. Spike has no intention of renouncing his belief in what it stands for as you’ll gather from Free and Rock’n’Roll Revolution. Those alongside Subway and Credit have renewed passion and professionalism with the lineup (listed on Bandcamp as Lorenzo, Alex, Pietro Twist and Ruggero). The musicianship and production have improved with a vengeance giving the material bite that has always laid dormant, waiting to be uncovered. This validates the old songs and places Sewage closer to artists they admire like GBH, Exploited and UK Subs. Despite an endless succession of lineup changes the tighter songwriting has given more emphasis to anthemic aspects of the songs, especially Punk Rock Party. Admittedly there is still a distance to go to reach the pinnacle of Sex Pistols, Dead Boys and Ramones but they are well on their way. And they’re not alone. If you go to Tompkins Square Park revolution is bigger than ever. Do a Youtube search to see for yourself and you might find them among the bands whose shows were recorded there. -Dave Wolff