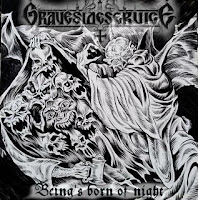 Band: GRAVESIDESERVICE
Location: Providence, Rhode Island
Country: USA
Genre: Avant garde black metal
EP: Beings Born of Night
Label: Independent
Format: Streaming
Release date: July 24, 2019
GraveSideService has been releasing demos and full lengths in one incarnation or another since 2005. Presently their lineup consists of founding members and former members of Ancestral Shadows and Inverticrux. I had a late introduction to them with their new EP, “Beings Born Of Night” and wondered why I hadn’t heard of them sooner. The reason is probably because they released all their work independently and never signed to an indie label. This has apparently given them room to grow according to their own conditions and explore every microscopic opportunity to pursue musical strangeness. As surprisingly artful and occult noir as their album art is, this still doesn’t prepare you for the madness beneath. “Beings Born Of Night” made me want to hear as many of their older releases as I’d have time to, if anything to see if they compare in terms of sheer bizarre appeal. The EP comes close to Ekphrastic poetry, in the sense that it’s as visually expressive as it’s unorthodox. It sounds like an homage to mental illness, paranoia, delirium, hysteria, schizophrenia and psychosis, all in thirty minutes. If any band could interconnect raw black metal with progressive exposition and structure that feels like classical to casual and experienced listeners of extreme metal, GraveSideService does so with a resourcefulness that causes extreme anxiety to the unaware and vulnerable. “Beings Born Of Night” is the soundstripe to a mind suddenly unhinging and derailing at a steadily frantic pace. Imagine irrationality slowly hijacking your ability to reason and there is little you can do to curtail the process. Then listen closely and carefully to how the EP’s mood fluctuates and transfigures from the intro song and outro song (actually the intro song in reverse with vocal overdubs), “Beings Born of Night” to “Depths I Yet May Reach” to “Crest Fallen” to “Pursued By Pleasures Ungodly”. The vocal arrangements are far from typical for most extreme music. There are one or two vocal styles that are extravagant, theatrical and more indicative of latter day Mayhem and the like, while the last style is more akin to traditional black metal. The constant exchange gives the EP more of a presentational feel and helps the overall lunacy. Highly recommended for souls condemned to hell. -Dave Wolff