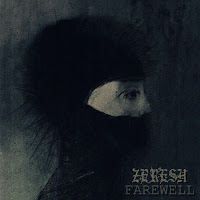 Project: Zeresh
Country: Israel
Genre: Atmospheric depressive dark folk
Full length: Farewell
Label: 999 Cuts
Format: CD, digital, streaming
Release date: September 1, 2019
The waning of summer, accompanied by desolation, nightmare and romanticism. This is what to expect from Zeresh’s full length effort “Farewell,” an album that surprisingly demonstrates how far underground music has come and how much farther it can go. “Farewell” is the follow up to Zeresh’s 2018 EP “Sigh For Sigh.” As a continuation of that EP, it makes an impression on the listener that won’t go away. The album is a homage to the cycle of nature in which everything lives, dies, sleeps and is reborn like the serpent of existence forever turning back on itself. Tamar Singer, the driving force of this project, shatters the mold of the single member project being viewed as a cliché, as “Farewell” is as creative as a single musician can be. The end of summer and the coming of fall is presented as a new beginning as the winds grow colder, the leaves wither and fall from trees and the days grow shorter. The decline that began with summer’s last days become more prominent as autumn’s first chills herald winter. Tamar perceives these changes on earth as a bittersweet parting of ways with summer, depicting this period of decline and deterioration as one of grace and allurement. Something to be welcomed with open arms, greeted as a friend or lover, not greeted with a downcast soul. She defines the inherent paganistic beauty in darkness, providing the means to find yourself in an environment where traditional laws of good and evil don’t apply. Here there is no light or darkness, no need for despair or fear of damnation. The farther you travel, the closer to your soul you get until you discover it’s your own and can’t be sold or stolen regardless of myth. This is so strongly felt because Tamar writes and composes this album with an undeniably human element, presenting each person as a reflection of nature. This album doesn’t express mankind’s endless trials, it becomes a living, breathing personification of mankind’s endless trials through music that can’t be defined by traditional means. The guitars, vocals, strings, atmosphere, sounds and effects are extensions of Tamar’s deepest inner self, not to mention that of the other artists and musicians who were involved in writing, recording and producing this album, taking “Farewell” to breathtaking heights of musical and aesthetic ecstasy that almost can’t be described in words. In the end it’s better felt than described. -Dave Wolff

Lineup:
Tamar Singer: All vocals and instruments
Violins on "The Ways Of Death" by Sara Krasemann
Noises on "Whitening Shade" by Michael Zolotov
Additional vocals and sounds on "All Perished" by Ayelet Rose Gottlieb

Track list:
1. Past Existence
2. The Harvest Moon
3. The Ways Of Death
4. Whitening Shade
5. Invictus
6. A Farewell
7. The Lake Isle Of Innisfree
8. Virtues
9. All Perished