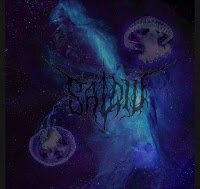 Band: Salqiu
Location: Recife, Pernambuco
Country: Brazil
Genre: Avant garde black metal
Full length: Invisible Music For The Unseen
Label: Independent
Format: Digital, streaming
Release date: September 25, 2019
Invisible Music For The Unseen is the experimental, often brutal yet uncomfortably trancing release from the Brazilian Black Metal solo project Salqiu.
The low-fi ambiance is imminent at the commencement of this EP. The first track, titled ‘Musica Invisivel ao Status Quo da Mediocridade' immediately places me into a distressing trance-like state of concentration to all the elements flooding through my headphones. The vocals rant and ramble across the music without any reprieve, transcending feelings of intoxication and placing me, as the listener at the mercy of this artist. Technology sounds provide a backdrop to frenzied brass instruments amidst blast beats and heavy guitars. No doubt this is obscure; however, it managed to maintain my interest with a personal need to see it through to completion.
‘In The Frozen Complexity of a Million Washed Brains' is often an uneasy listen; however, the discomfort peaks here and I am sure this is exactly what Salqiu intended. This entire design was not one to create feelings of pleasantries within its ambiance, rather a mood of disquiet and agitation and one that will push you well outside of your avant-garde black metal comfort zone. This is a hypnotic track, with vocals that hiss and spit across the abstruse soundscapes with impact. Add to this a hysterical guitar solo and deadly random percussion, yet this is 13 minutes and 48 seconds of good and curious listening.
There is a slight interlude to the emotionally tormenting atmosphere of sounds that had come before the third track, ‘Loathing Imprecations Upon Spurious Idols' with its intro of peaceful yet ominously tainted guitar patterns, which momentarily gave rest to the chaos before an onslaught of distress and intensity. Only this time the artist offers shimmering signature blackened riffage, rhythmic drum line and growls that are on the low-fi end, which smears a scent of mystery and fear. The electronic passages and distorted bass drone in and is nicely executed before the crescendo of madness strikes again.
An epic-length finale sees this creative, unusual and intriguing EP to its completion. ‘Pandemonium & Chaos – Hail Lurkers of Oblivion' initially shows progressive rock beats and a nice display of blackened guitars. With a prominent bassline and echoes of woodwind and brass instruments colliding into insanity, this track certainly feels like a journey. There is a great climax of guttural vocal folds and overall brutality as the experience moves through several tempo changes, rhythm mash-ups, and sound experiences. If you can get to the end of the 21 minutes and 49 seconds, you might wonder, as I did, what you just went through, although it was not without admiration for the lurid difference this artist brought forward.
‘Invisible Music For The Unseen’ is like a movie you found hard to watch, yet continued to replay in your mind well after it had finished, until you find yourself watching it again and respecting it more for its originality, bravery, and artistry. -Kelly Tee